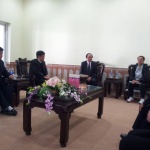 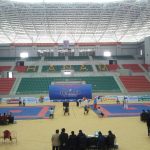 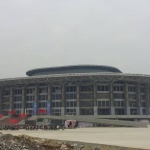 Bangkok, Thailand, January 16, 2015 – A newly-constructed Ha Nam Gymnasium boasts one of the modern gymnasiums in Vietnam which can serve well for future major AVC and FIVB volleyball competitions.

With a seating capacity of 7,500 spectators, the gymnasium is located nearly 70km from Hanoi Airport and it takes only one hour in travelling by car from the airport to the gymnasium.

In his recent visit to Ha Nam as the official inspection to the Ha Nam Gymnasium, which will serve as the main competition venue for the 2015 Asian Women’s Club Volleyball Championship between September 12 and 20, Shanrit Wongprasert, chairman of the AVC Sports Events Council, expressed his satisfaction over the gymnasium’s condition.

“AVC has already released six major volleyball tournaments to be competed in 2015 and among the six competitions, only the Asian Women’s Club Championship in Hanam, Vietnam will utilise the newly-built Ha Nam Gymnasium, which has never been used as the competition venue for any volleyball competitions,” Shanrit cited.

“During my trip to Ha Nam, a group of officials led by Dr Nguyen Xuan Dong, chairman of the Ha Nam Provincial People’s Committee, led me in the inspection to the competition site, both the competition and the training gymnasiums and the hotel. I was informed that the construction of the Ha Nam Gymnasium received tremendous supports from Ha Nam’s executive board members.

“As far as I see the Ha Nam Gymnasium, it can be used as the main competition venue for future major tournaments of both AVC and FIVB. The gymnasium is located at a fair distance of around 30-60 kilometres from neighbouring provinces such as Ninh Binh, Nam Dinh and Vinh Phuc which have all hosted AVC competitions in 5,000-seater gymnasiums. I’m confident that the World Age Limit tournaments sanctioned by the FIVB which have attracted either 16 teams or 20 teams can be held here at the Ha Nam Gymnasium. It will be one of the main arenas which can host any top-flight volleyball tournaments,” Shanrit concluded.