Bangkok, Thailand, February 24, 2015 – The AVC Coaches Committee need all database connections shared with other confederations not only to learn how many development courses they might need but also to plan their future Coaches and Technical Seminars.

AVC’s Secretary-General Shanrit Wongprasert and Dr Ruengsak Siriphol, General- Manager of the AVC Headquarters, jointly presided over the opening of the one-day meeting at Dusit Princess Hotel in Bangkok. Mr Tomas Santamaria from Australia, chairman of the AVC Coaches Committee, chaired the meeting, which was attended by Sahib Aldin Alriyami from Oman, Mr Chang Nai-Chi from Chinese Taipei and Mr Mohammed Althawadi from Bahrain.

Mr Shanrit delivered a welcome speech by informing the meeting attendants about the shift of the AVC Headquarters from Beijing, China to Bangkok, the inauguration of the Headquarters as well as the related task and assignments the AVC Headquarters in Bangkok to deal with. Undoubtedly, it’s a tough challenge, but also a mission they have to accomplish.

“We started our work at the new headquarters in Bangkok last September and so far, we have run the office smoothly. Everything is going well as planned. The FIVB have released new rules and regulations this year and we, therefore, have to catch up with the updates and the decisions made by the FIVB. It’s necessary that we learn any FIVB movement closely from now on,” Shanrit said.

“I think you all have learned that in major competitions such as the World League, the World Grand Prix and the World Cup, a total of 14 players including two liberos can, according to the new rules and regulations, sit on the bench during the competition. In terms of the courses to be held this year, we have already circulated the forms to all affiliated members the courses they would like to host. However, not too many countries returned us the forms. I wish you all the best success of the meeting and a pleasant stay in Thailand,” he added.

In his opening remark, Mr Santamaria said that this is the first time that the AVC CC Meeting was held in Bangkok, where the AVC Headquarters is located. He reported about the activities he has done the previous year, followed by the activity report from each member.

Mr Althawadi informed that he had attended the FIVB Coaching Commission in Lausanne, Switzerland from February 3 to 4 and has quoted Dr Ary Graca as saying that the FIVB President had urged all confederations to hold more development activities and coordinate well among them.

“The President suggested that more seminars be organised. However, they should focus on new ideas and new points in order that each confederation can make the most of those courses as much as possible,” Mr Althawadi stated.

Said Mr Santamaria, “In fact, we should communicate with the Coaches Committees of other confederations, thus we can exchange ideas and share database each other such as what courses and what level of those courses conducted in each confederation and how many courses have been held. If we have the shared database, we can take the feasibility study about what courses we should hold for AVC.” 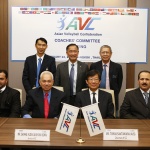 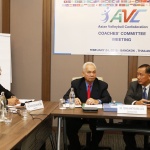 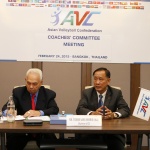 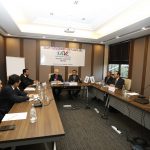 The atmosphere during the AVC Coaches Committee Meeting at Dusit Princess Hotel in Bangkok, Thailand.