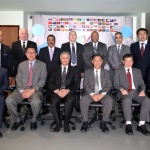 Mr Shanrit Wongprasert, chairman of the AVC Sports Events Council, and its members pose in a group photo prior to the AVC SEC Meeting at the AVC Headquartrers in Bangkok, Thailand. 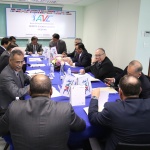 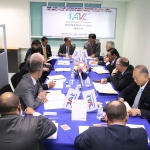 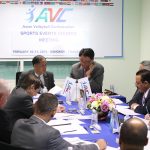 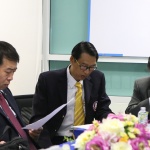 Bangkok, Thailand, February 11, 2015 – The Asian Volleyball Confederation (AVC) Sports Events Council Members gathered at the AVC Headquarters in the Thai capital city Bangkok on Tuesday to discuss about the FIVB’s proposals and the AVC’s future major competitions in the two-day meeting.
Twelve members participated in the annual meeting, chaired by the AVC Sports Events Chairman Shanrit Wongprasert. Since the FIVB have increased more competitions and simultaneously changed the international competition calendar of world-class events, the AVC Sports Events Council, therefore, have to work much harder to update with the FIVB decisions.
Prior to the meeting, Jaksuwan Tocharoen, secretary-general of the Thailand Volleyball Association, delivered a welcome speech on behalf of the organisers.
“This is the first AVC Technical Committee Meeting, held at the new AVC Headquarters in Bangkok, Thailand. We are very pleased and honoured to have an opportunity to welcome all the members of the AVC Sports Events Council an. We will do our best to serve all of you during your stay here. The TVA are willing to throw in our full support for all the AVC activities. I sincerely wish you a very happy stay in Bangkok and the best success of the 2015 Sports Events Council Meeting,” Jaksuwan said.
The meeting started with the approval of the Minutes of the 2014 AVC Sports Events Council Meeting in Beijing, China and the reports on the previous year’s competitions followed by the report on the FIVB Sports Events Council Meeting in Lausanne, Switzerland on February 5-6.
According to the meeting, it was informed that up to 14 players will be on the O-2 bis form in which all 14 players are allowed on the scoresheet for each match of the FIVB competitions, while any request of the Video Challenge will be made by the coach to the second referee via tablets or electronic pads. However, the meeting have decided not to use the Video Challenge in all AVC competitions this year, but instead will conduct the possibility study of using the technology appliance in the near future.
In terms of the change of the Federation of Origin regulations over a certain age under certain conditions, if a player has been living in one country for eight consecutive years and has reached 38 for men and 35 for women, he or she can change their federations without charging for the administrative fee, with the consent of both NFs and FIVB.
Meanwhile, the meeting discussed about the preparatory report of major AVC tournaments this year and three years ahead. As there still be some tournaments including the next year’s 18th Asian Men’s U20 Volleyball Championship with hosts yet decided, Shanrit informed the meeting to seek the host country as fast as possible. According to Shanrit, the organisers of all the 2016 and 2017 AVC competitions should be known before the end of coming April.
“We met here not only to learn what we have done so far and what we should do for future activities of AVC and its affiliated member countries, but we also have to catch up with the FIVB’s updated changes of competition schedule and necessary information confederations should not miss,” Shanrit concluded at the end of the meeting.
a
Share