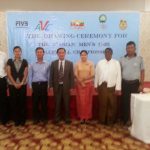 AVC Sports Events Council chairman Mr Shanrit Wongprasert, middle, poses in a group photo with the organisers during the drawing ceremony of the 1st Asian Men’s U23 Volleyball Championship in Nay Pyi Taw, Myanmar on February 16 Nay Pyi Taw, Myanmar, February 16, 2015 – Hosts Myanmar will be pitted against Maldives in their opening match of the first Asian Men’s U23 Volleyball Championship following the draw conducted in the Myanmar capital city on Monday.

A large field of 19 teams have confirmed their participation in the inaugural competition due to be held in Nay Pyi Taw, Myanmar from May 12 to 20. They comprise Australia, Afghanistan, China, Indonesia, India, Iran, Japan, Kazakhstan, Korea, Saudi Arabia, Malaysia, Maldives, Myanmar, the Philippines, Qatar, Thailand, Turkmenistan, Chinese Taipei and Vietnam.

According to the draw, the results of the previous Asian Men’s Junior Volleyball Championship in Bahrain last year were taken into consideration for seedings which saw hosts Myanmar drawn in Pool A, with the Asian Men’s Junior champions Iran, runners-up China and third-place Korea in Pool B, Pool C and Pool D respectively

Drawn alongside Myanmar in Pool A were Thailand, which finished eighth in the Asian Men’s Junior Championship, Afghanistan, Maldives and Saudi Arabia. Pool B comprises Iran, Qatar, the Philippines, Malaysia and India.

The pool round-robin preliminaries will be held from May 12 to 16. The opening matches see hosts Myanmar take on Maldives, Thailand challenge Saudi Arabia, Qatar meet Malaysia, the Philippines pitted against India, China face Turkmenistan, Vietnam battle with Chinese Taipei and Korea test their mettle with Kazakhstan.

After the conclusion of the preliminaries on May 16, the draw of lots will be conducted between the top two teams in each pool. The teams which have already played among each other will not play again. The same procedure will be applied for the teams finishing third and fourth of each pool.

At the completion of the nine-day championship, only top two teams will qualify for the 2nd FIVB Men’s U23 World Championship in Dubai, the United Arabs Emirates from August 24 to 31.

Match schedule for preliminary round