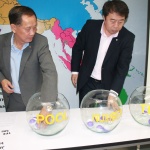 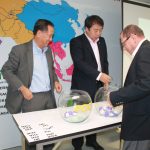 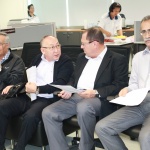 AVC Sports Events Council Members witness the draw of lots on Wednesday at the AVC Headquarters in Bangkok, Thailand.

Bangkok, Thailand, February 11, 2015 – Reigning champions Thailand were given a comfortable draw in Pool B with Chinese Taipei, Hong Kong and Sri Lanka in the 18th Asian Senior Women’s Volleyball Championship, due to be held in Tianjin and Beijing, China from May 20 to 28.

A total of 16 teams have submitted their entries to the biennial tournament. Only top three teams from this top-flight tournament plus hosts Japan will clinch their berths to be pitted in the FIVB World Olympic Qualification Tournament next May.

The draw of lots took place on Wednesday at the AVC Headquarters in Thai capital city Bangkok, with Shanrit Wongprasert, chairman of the AVC Sports Events Council, conducting the ceremony joined by the AVC SEC members from 11 countries.

According to the draw, hosts and world No.3 China,India, Fiji and Iran are in Pool A, with Thailand, current world No.12 and two-time Asian champions, Chinese Taipei, Hong Kong and Sri Lanka in Pool B. Pool C comprises Vietnam, Mongolia, Turkmenistan and Japan, while Pool D consists of the Philippines, Kazakhstan, Korea and Australia.

Thailand, which stunned Asian powerhouses China in the semi-finals and Japan in the showdown, are due to kick off their title defence against Chinese Taipei in their opening match on May 20 before going up against Hong Kong and Sri Lanka the following days in the pool round-robin preliminaries. In the second round, the round of last eight teams, the Thai team are expected to challenge Korea and Kazakhstan. Thailand can enhance their chance of advancing to the semi-finals only if they can beat either Korea or Kazakhstan or both teams in their playoffs.

“It’s an easy draw for my team in the first round, but after that I found that it’s a tougher task as we have to take on both Kazakhstan and Korea. However, though it will be a tough going in this tournament, I have set sight on my team to advance to top four to make sure they will be eligible for the next year’s World Olympic Qualification Tournament in Japan,” national head coach Kiattipong Radchatagriengai commented after learning the draw.

“We have set up a long-term training. Some players in my team sustained injury, while many have been busy competing for their own clubs in the on-going Thailand League.  The injured players must be given the tight treatment, while the sports science has to be applied to make sure that the injured players can recover fast and the team’s health condition will be back on track after that. We will have one and a half month to set up an intensive training in preparation for the championship,” he said.

The Thai spikers reigned supreme in the previous Asian meet on home soil in Nakhon Ratchasima two years ago following a stunning 3-0 victory over Japan in the showdown, while perennial champions China experienced the worst nightmare after they dropped from the top three for the first time in history to return with a disappointing fourth place.