Bangkok, Thailand, February 27, 2015 – The AVC Medical Committee held an annual meeting at Dusit Princess Srinakarin Hotel in Bangkok to review their work the previous year and prepare for medical activities in near future competitions.

AVC’s Secretary-General Mr Shanrit Wongprasert presided over the opening of the one-day meeting, which was chaired by the AVC Medical Committee Chairman Dr Yuichiro Hamu from Japan. Also in the meeting were Dr Ramin Tabatabaei from Iran, Dr Oh Jae Keun from Korea and the Committee’s Secretary Dr Rueangsak Siriphol from Thailand.

In his welcome speech, Mr Shanrit said, “On behalf of the AVC President Dr Saleh Bin Nasser, I would like to welcome all of you to the first AVC Medical Committee Meeting in Thailand. We, as the organiser, will do our best in offering cooperation to make this meeting a success. I wish you all a pleasant stay in Thailand.”

Dr Hamu expressed his satisfaction over the organiser’s good arrangement and preparation for the meeting. “I would like to express my sincere gratitude for Thailand’s excellent preparation. It’s very fortunate that Thailand was chosen as the location of the AVC Headquarters. The second news was that Dr Rueangsak Siriphol, the AVC Medical Committee Secretary, has emerged as the General Manager of the AVC Headquarters here.

Dr Hamu started the meeting by giving the thumbs-up to Italy and Poland for exceptionally hosting the respective FIVB Women’s and Men’s Volleyball Championships last year. “Both events have been regarded as historical successes in the FIVB World Championships,” he said.

After that, the AVC MC Chairman reported to the meeting about his attendance at the last year’s 34th FIVB World Congress in Sardinia, Italy and the recent FIVB Medical Commission in Lausanne, Switzerland. The main point, he said, was on the FIVB Medical Department’s activities in 2014 which has actively pursued its principal missions in the field of anti-doping: testing, reviewing Anti-Doping Education Programme and FIVB Number of Tests – Urine and Blood, education and communication.

“We (the Medical Committee) aim to focus mainly not only on doping issues, but also on education. We’ve planned to hold future medical seminars as well as organise doping on youth athletes and injury in each player. In terms of the new rules and regulations of the FIVB, the team previously put the doctor on the bench, but things have changed. From now on, it depends upon the coach’s decision if he would like to have the team doctor on the bench during the competition.”

Dr Hamu also presented the information of the FIVB Medical Commission to the meeting, commenting on the situations and the problems the Medical Delegate had faced during his work in various competitions to find out possible best solutions in their future assignments.

The meeting also discussed about the problems faced during conducting the duty as the Medical Delegate of each competition, the doping control testing in competitions including the coming Olympic Qualification Asian Beach Volleyball Zonal Tournaments and the medical expenditure. The meeting agreed in principle that during the competitions, the team have to pay themselves for any further treatment fees of their injured players after use of the on-site first aid kits. Team players are advised to have their travel insurance when competing in other countries.  The meeting also proposed the outreach programme in some AVC events.

In conclusion, Dr Hamu insisted that with a close communication to each other, the AVC Medical Committee should succeed in the medical activities.

“We will try our utmost effort to push AVC to help fulfil our mission. Moreover, we will put more movements to beach volleyball. We can achieve that target only the schedule of the beach volleyball competitions is fixed. Therefore, we have to make sure everything is now put on the right place.” 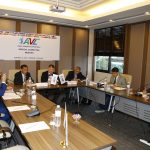 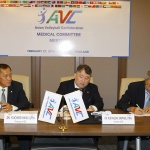 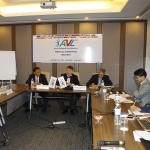 The AVC Medical Committee members discuss during their recent meeting in Bangkok. 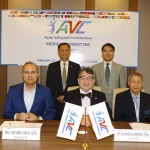