Bangkok, Thailand, March 23, 2015 – Nong Khai, a northeastern province of Thailand with a distance of approximate 624 kilometres from capital city Bangkok, has confirmed its readiness to host the AVC Continental Cup Beach Volleyball Olympic Qualification 2016 South East Asian Zone at Jommanee Beach on the Mekong River Banks between April 2 and 5.

According to the rules and regulations, each country (in both categories) will field two teams apiece, A and B. To win the match, a country have to win 2-0 (wins for A and B teams). If the clash between the two countries ends in a 1-1 draw (A wins, but B loses, or vice versa), a golden match will be set up to determine the eventual winners (any player can be chosen from A and B teams to represent their country in this deciding match).

The winners in the men’s and women’s categories will directly advance to the next year’s Continental Cup Finals, while teams finishing second and third places (in both categories) will next be pitted in the Continental Cup Semi-finals in either May or June.

“To make sure that you will have an opportunity to compete in the Finals, you have to do your best in the Nong Khai meet to capture the title. If you are not successful in Nong Khai by finishing second or third place out there, you have to next play in the Semi-finals, which are not easy for you because you have to compete against strong teams from other Zones,” Shanrit Wongprasert, secretary-general of the Asian Volleyball Confederation, said in Monday’s press conference.

The competition venue for the Nakhon Si Thammarat meet annually took place at Nadan Beach in Khanom District, but it was shifted to be held at the Thungsoong Stadium in Thungsong District instead this time. As the Thungsong Stadium is a makeshift arena, it’s necessary that tons of sand fill the stadium for six competition courts.

“The Samila Asian Tour in Songkhla is a special competition this time because the FIVB (International Volleyball Federation) will test the use of Video Challenge (hawk eye) for this year’s World Tour events. We have to be well-prepared in getting used to the Video Challenge as we will use it for sure during the World Grand Prix preliminaries Pool A in Bangkok in early July,” Shanrit added. 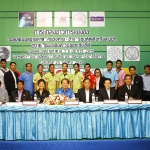 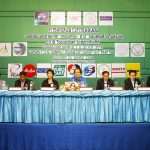