Bangkok, Thailand, April 26, 2015 – The FIVB Referee Instructor’s Seminar 2015, hosted by the FIVB in collaboration with the FIVB Development Center in Thailand, was concluded on Sunday, with Mr Shanrit Wongprasert, FIVB Board of Administration Member and AVC Secretary-General, presiding over the closing ceremony at Dusit Princess Srinakarin Hotel in Bangkok.

The seminar, which was the third time to be held since its inception in 1989 in Bahrain and the second time in Thailand in 2003, kicked off on April 20 and continued through April 26, with 15 well-qualified persons from four continents taking part in the course.

Among the 15 participants, which comprised six from Europe, five from Asia, three from Africa and one from the Norceca, were two women joining such a seminar for the first time – Mrs Zorica Bjelic from Serbia and Mrs Oana Sarb from Romania.

During the one-week seminar, a variety of methods were utilised to address subject areas, which included assessor reporting and rules and game analysis.

“I would like to say that this course far surpassed my expectation. I’m very satisfied with a great success of the course, which was run successfully, thanks largely to the huge support of the FIVB and the FIVB Development Center in Thailand. Moreover, I would like to give all of you the thumbs up for your kind cooperation in this workshop. Congratulations for your achievement. I hope all of you will gain recognition as accomplished FIVB referee instructors in the near future. Lastly, I wish all of you bon voyage on your journey back home,” Course Director Mr Hassan Mohamed Al Hanafy gave a speech after the certificate presentation.

In his closing speech, Mr Shanrit Wongprasert, presiding over the certificate presentation and the closing ceremony, said, “In this memorable moment, I would like to congratulate all of you on your achievement. By joining the seminar, all of you will gain valuable experiences through the exchange of ideas and experiences among you aside from improving your knowledge and competence. After a one-week-long seminar, it’s now a time to say good bye to each other. I wish all of you a pleasant trip back home safe and sound.” 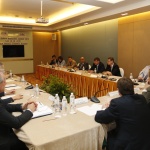 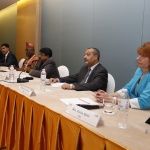 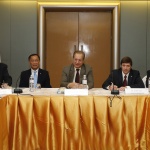 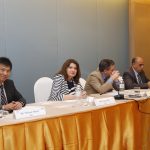 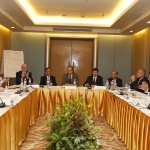 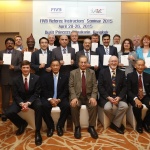