Bangkok, Thailand, April 20, 2015 – The 2015 South East Asian Volleyball Association Meeting took place at Dusit Princess Srinakarin Hotel in Bangkok on Monday, with 10 affiliated member countries taking part to review their hard works and activities the past year and look ahead to future volleyball and beach volleyball competitions in line with development policy of the AVC and the FIVB.

The welcome address from TVA President Mr Somporn Chaibangyang was followed by the opening speeches from Dr Saleh A. Bin Nasser and Mr Wei Jizhong.

Dr Saleh A. Bin Nasser informed the meeting that the AVC First Executive Vice-President Mr Essa Hamzah Ahmad was supposed to attend the meeting, but for some reasons he had to fly back to Kuwait.

“Mr Essa Hamzah apologised for not being with us this time and before his departure, he wished us the very best of luck in our work,” said the AVC President. “On behalf of the AVC, I’m honoured to have an opportunity of meeting with all of you. Nowadays, the Southeastern Asian Zone has been regarded as one of the active Zonal Associations under the umbrella of the AVC. We can realise this through a number of competitions, entries and the hosts of the Asian competitions they have involved in both volleyball and beach volleyball. Their good cooperation to join other activities organised by the AVC and FIVB can also be seen at development centers.

“However, some federations still lack development in volleyball. The AVC have decided to support activities of these federations. Basic and high level of knowledge and techniques will be used under the FIVB’s financial support to improve their future cooperation. In terms of the financial support for federations, it was said long time ago by my teacher Mr Wei that money comes for sport must be spent for sport, not to be saved in the bank.

“I can confirm all of you that that the AVC will support all of your activities concerning volleyball and beach volleyball. I wish the Southeastern Asian Volleyball Association Meeting a great success,” Dr Saleh A. Bin Nasser concluded.

The minutes of the previous meeting on October 7 last year was approved, as the meeting conductor Mr Shanrit Wongprasert, himself the AVC Sports Events Committee Chairman, reported on the FIVB Sports Events Council meeting during February 5 and 6, 2015 in Lausanne, Switzerland which mainly concerns with the staging of the AVC Championships for both the organisres and participating teams.

“Following the decision from the 2014 meeting, touching the net is one of the key points we have to bring back for use. That means any touch of the net during the on-going competition will be considered fault in both beach volleyball and indoor volleyball competitions. The FIVB have also recommended that the range of the free zone be reduced to 6.5 meters instead of 8 meters. However, we can study this from the FIVB competitions this year, maybe during the World League, the World Grand Prix, the World Cup and all senior competitions. We so far have yet received any court layouts,” Mr Shanrit explained.

“The FIVB have initiated a new policy for each participating team to feature 14 players in the O-2 biz form, especially all FIVB senior championships. However, the FIVB world underage competitions this year remain unchanged with 12 players in each side. In terms of the AVC, we have asked the organisers for the Asian Senior Championships to realise this change. However, the change cannot be made in the Asian Women’s Senior Championship from May 20 to 28 in China because the organisers have already arranged accommodations for participating teams of 12 players only. As for the Asian Men’s Senior Championship in Tehran, Iran, the change is possible. Upon my presence in the draw of lots there, I will ask the organisers whether they want to test each team having 14 players on the bench. Nevertheless, each team can field 14 players only when they have two libero players. Two liberos can also be used in any team with 12 players,” he continued.

He added that the players aged 38 for men and 35 for women who stay in one country for up to eight years and would like to change nationality, they, approved by the FIVB, can do that without paying transfer fees. Additionally, Mr Shanrit has asked affiliated member countries to avoid hosting international competitions in clashes with AVC- and FIVB-sanctioned tournaments. If they would like to organise any international tournament, the FIVB competition calendar should be properly studied. This year, there will be six AVC competitions including the inaugural Asian Women’s U23 Championship in Manila, the Philippines from May 1 to 9 and the inaugural Asian Men’s U23 Championship in Nay Pyi Taw, Myanmar during May 12 and 20.

In addition, the FIVB world ranking updates, according to Mr Shanrit, should be checked occasionally by all affiliated member countries as the seeded teams in major competitions will concern with the world rankings. If any member nation would like to organise either beach or indoor competitions, the AVC Headquarters in Bangkok, Thailand can be contacted for more ranking updates of  both team and players rankings in beach and indoor volleyball events.

“The Asean teams will always find it very difficult to test their mettle in major tournaments such as the World League and World Grand Prix. Therefore, the only way they can take part in such tournament is to host the event. As far as I’m concerned, Vietnam and the Philippines have already proved well they have capability to host the world events. Any member country would like to organise the 2017 Underage World Championships should download bidding forms from the FIVB website and send them to the FIVB ahead of its Board of Administration Meeting in May,” Mr Shanrit continued.

In his speech to the meeting, the FIVB and AVC Honorary Life President Mr Wei Jizhong has asked the meeting to improve communication among national federations, the AVC and the FIVB. He also suggested the meeting that they act first and the assistance comes. Outside assistance for proper actions is unreliable. Under the leadership of Dr Saleh A. Bin Nasser, the AVC, said Mr Wei Jizhong, have accomplished remarkable achievements. 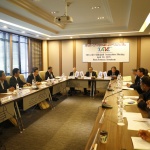 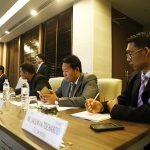 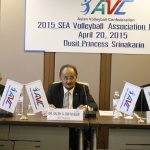 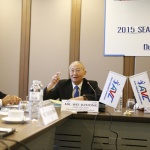 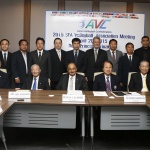