On a day when unexpected rain marred the first-day competition, world No.61 Varapatsorn/Tanarattha, silver medallists at the last year’s Asian Games in Incheon, Korea and the Asian Beach Games on home soil in Phuket, got off to a great start in the three-day, double-gender tournament in Songkhla as they pulled off a comfortable 21-12 21-11 victory over Hong Kong’s 2 To Wing Tung/Koo Yung Yung to thrash Singapore’s Gabrielle Gomes Chloe/Tan Shiang Theng in a totally one-sided 21-8 21-5 encounter in 28 minutes in their second match. With a clean sweep in Pool B, the Thai duo, who have already qualified for the FIVB World Beach Volleyball Championships in The Netherlands from June 26 to July 5, booked their berth in the Wednesday’s elimination round, where they are due to take on Japan 2’s Shinako Tanaka/Ayumi Kusano.

Top seeds Takemi Nishibori/Sayaka Mizoe of Japan 1, winners at the last week’s Asian Beach Volleyball Tour Nakhon Si Open in Thungsong, enjoyed a first-round bye in Pool A on Tuesday. In their second match on the same day, the Japanese breezed past Vietnam 1’s Nguyen Vu Ngoc Lan/Ngo Vo Thanh Loan 21-7 21-7 in just 20 minutes to top Pool A. The in-form Japanese are due to take on New Zealand 1’s Julia Tilley/Shaunna Polley the following day.

In the men’s competition, top three seeds captured easy wins on the opening day. Kazakhstan 1’s Alexandr Dyachenko/Alexey Sidorenko, top seeds, winners at the last week’s Thungsong meet and gold medallists at the last year’s Asian Games in Incheon, Korea, had a little problems in thrashing Papua New Guinea 2’s Richard Batari/Ake Walo 21-8 21-15 in Pool A. The Kazakhs received bye in their second meet and, as there are only two teams in Pool A, top the Pool. Dyachenko/Sidorenko advanced to play in the knock-out round on Wednesday morning.

The elimination round will be held on Wednesday morning, with the quarter-finals taking place in the afternoon. Top teams from each pool will advance as the standing teams to the knock-out round, while teams finishing second places from each pool will be drawn to compete in that round. The winning teams in the knock-out round will next go up against one another in the quarter-finals on Wednesday afternoon. 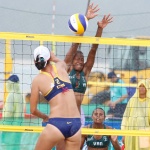 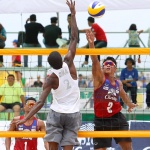 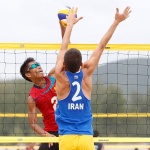 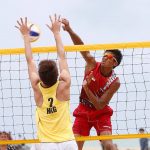 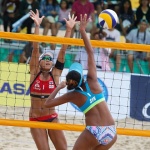 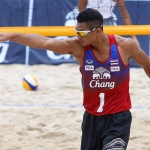 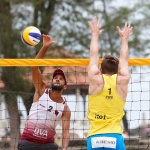