A large crowd of local spectators survived the sapping heat at the Samila Beach in Songkhla to cheer on their favourite teams only to see all of the Thai spikers eliminated from the US$30,000 double-gender competition.

Title-holders and second seeds Varapatsorn and Tanarattha, current world No.61 and silver medallists at the last year’s Asian Games in Incheon, Korea and the Asian Beach Games on home soil in Phuket, cruised their ways past Japan 2’s Shinako Tanaka/Ayumi Kusano 21-19 21-16 in the knock-out round, but could not overcome the determined Jasita Putu Utami/Dhita Juliana of Indonesia 1, bronze medallists at the Asian Beach Games, to go down in hard-fought three sets 18-21 21-16 10-15 in the quarter-finals.

Earlier, the Indonesians brushed off Srinuch Kawpong/Pornsuda Kritsana without much effort 21-9 21-0 in the knock-out round, as the Thailand 3’s duo suffered from the injury and decided to withdraw from the on-going contest. Another home side, Thailand 2’s Rumpaipruet Numwong/Khanittha Hongpak fell victim to Vanuatu’s Miller Pata/Linlin Matauatu, silver medallists at the last week’s Thungsong meet, after easily losing 13-21 11-21 in the quarter-finals.

Top seeds Takemi Nishibori/Sayaka Mizoe of Japan 1, winners at the Thungsong meet, also crashed out of the three-day competition after going down to Australia 2’s Becchara Palmer/Tamsin Hinchley 15-21 17-21 in the Wednesday’s quarter-finals. As the top two seeds in the women’s event were eliminated, third seeds and the Asian Beach Games gold medallists Tatyana Mashkova/Irina Tsimbalova proved to be an incredible nut to crack as the Kazakh duo powered their ways to the semi-finals following  a convincing 21-14 21-14 win over New Zealand 2’s Danielle Quigley/Melissa Ruru in the quarter-finals.

In the semi-finals on Thursday morning, Australia 2’s Palmer/Hinchley are due to challenge Vanuatu’s Pata/Matauatu and Kazakhstan’s Mashkova/Tsimbalova to go up against Indonesia 1’s Jasita/Dhita.

Meanwhile, Iran 1’s Rahman Raoufi/Bahman Salemi Injehoroun and Iran 2’s Saber Hoshmand/Abbas Pourasgar made their country proud after storming their ways into the semi-finals in the men’s category.

The Iran 1’s duo lived up to their billing as defending champions as they pulled off a magnificent come-from-behind 13-21 21-18 15-9 victory in gruelling 50 minutes over top seeds Alexandr Dyachenko/Alexey Sidorenko, the Asian Games gold medallists in Incheon, Korea fresh from claiming the title at the last week’s AVC Beach Volleyball Tour Nakhon Si Open in Thungsong.

Iran 1’s Raoufi/Salemi are due to take on China 1’s Ha Likejiang/Bao Jian in the Thursday’s semi-finals. The Chinese pairing came from behind to beat Oman 1’s Haitham Al-Sheroiqi/Ahmed Al-Housni 18-21 25-23 16-14 in epic 82-minute quarter-final clash.

The other semi-final encounter sees Iran 2’s Hoshmand/Pourasqar next challenge New Zealand 1’s Watson/O’Dea. The Iranians outclassed Kazakhstan 2’s Dmitriy Yakovlev/Alexey Kuleshov 21-17 21-19, while the Kiwis proved too strong for Prathip Sukto/Kittipat Yungtin to gun down the Thailand 1’s duo 21-8 21-14 in 36 minutes in the Wednesday’s quarter-finals. The Thai tandem stunned second seeds Wu Jiaxin/Li Jian of China 2, silver medallists at the last week’s Thungsong meet, 21-18 15-21 15-12 in the knock-out round earlier.

Aside from the Thailand 1’s duo, the host countries sank hearts when the other two men’s teams were also eliminated, with Thailand 2’s Panupong Toyam/Nuttanon Inkiew and Thailand 3’s Chanon Ketpet/Sarawut Kootprao losing successive two matches in their pool plays.

On Thursday, the final day of the top-notch competition, the men’s and women’s semi-finals will be held in the morning session, while the third-place playoffs and the final showdowns in both categories will take place in the afternoon, followed by the awards presentation and the closing ceremony. 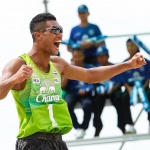 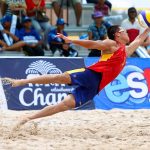 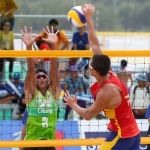 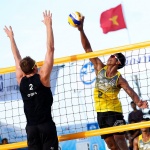 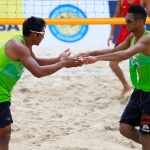 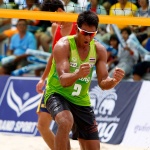 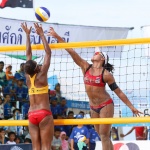 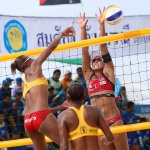 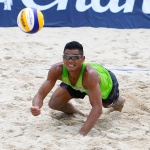 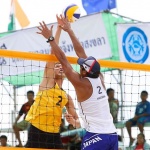 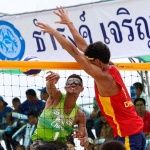 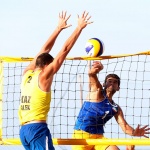 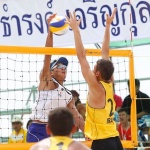 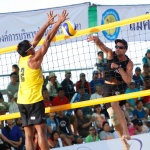 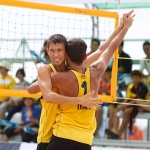 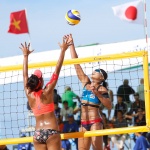 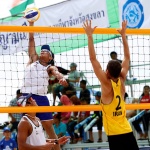