Before the game both teams were expecting a tough duel, but the strong visitors came up with below-par service and the Iranians then did their utmost to take advantage  by  pushing the opponents to the limit. The home side imposed a big surprise to the USA by beating them in what could be their best finish ever in clashes with the USA. Iran will now now look forward to the second home encounter on Sunday.

Shahram Mahmoudi led Iran with 17 points, while Anderson Matthew of the USA scoring a match-high 14 points.

The first set started with service from the visitors, but Iran gained an upper hand initially to lead 3-1. However, things turned sour for the home side as they came up with unforced service errors for a 5-5 tie. Iran gradually pulled their game together to stretch the lead to 16-11. The USA tried hard to reduce the gap, but their efforts were in vain. Iran snatched the first set 25-19.

The second set was more thrilling when both sides fought hard with all they had for a 5-5 equaliser. The USA found their touch and roared back gallantly to take an initial 8-5 lead before widening it 19-15, forcing the Iranian head coach to ask for time-out. The host team put their act together and came a whisker of closing the margin, only the visitors improved on their blocking to stay in front 23-21.

Cheered on by the home crowds, the Iranians smashed precise and sharp spikes to tie the score 24-24 and went on to take the hard-fought thrilling set 29-27 and a commanding 2-0 lead.

Iran continued their exceptional form in the third set, while the USA tried to make amends for the two-set loss. Both sides were tied at 6-6 before the Iranians shone through their tactics to move ahead 20-15. The USA poured everything to catch up with the host side, but Iran performed exceptionally well to defy against all odds to win the set 25-20 and the match.

It was the first loss of US in the World League games in the current year. Iran now have 10 points to maintain their third place in Pool B, with the USA in top spot of the pol with 17 points. The other game saw Poland pull off a stunning 3-1 victory over Russia to collect 14 points for the second place in the pool.

In the post match press conference, Iranian head coach Kovac said: “We did a great job. I assume the game was tough for both teams, the cheering atmosphere inside the hall was tense for both teams. Like the visitors, we also had much pressure by our loyal fans. As far as I’m concerned, Iran has capacity to play better than today. I also expect in the future that Iran will play better against the USA. Any other team did not have good reception as the USA here in Tehran. We should try to put more pressure over them.”

USA head coach John Speraw was not satisfied with his team’s performances and said:” Certainly on Sunday we will come up better. There was a special atmosphere inside the hall. I think in the second set we played well, but in some crucial points, Iran’s good services had influence over us. In the next match, we will try to improve our game. However, I believe we will have a competitive match again on Sunday.” 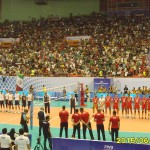 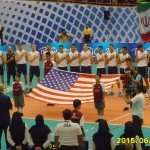 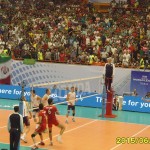 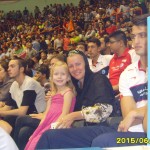 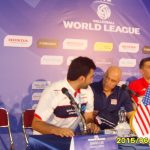