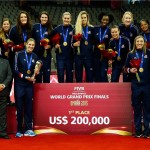 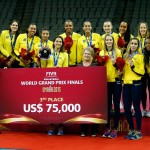 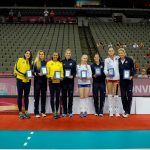 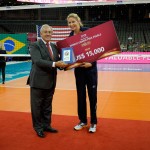 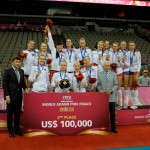 Omaha, USA, July 27, 2015 – Although the last day of the FIVB World Grand Prix Finals seemed a bit anti-climactic with the United States having clinched the title the previous day, Sunday did not go without drama and excitement in Omaha as four teams battled to reach the silver and bronze podium spots.

As four teams entered the final day 2-2, Russia came away with the silver medal after defeating Japan and Brazil claimed the bronze on a day they defeated Italy.

The USA gave their home fans plenty to cheer about Sunday as they defeated China 25-23, 25-19, 25-18. Karsta Lowe sparked the American offense with 17 points, while Megan Easy added 13 points in her first start of the Final round. China’s Liu Yanhan scored a team-best 16 points, while Xiaotong Liu totaled nine points. USA held a 7-3 block advantage.

Russia ended the tournament 3-2 and with the silver medal, while Japan was winless in five matches of the six-team round-robin event.