Tehran, Iran, August 1, 2015 – Powerhouses Iran, Chinese Taipei, Qatar, Korea and China remain unbeaten on the second day of the 18th Asian Senior Men’s Volleyball Championship at the Azadi Sport Complex on Saturday, with the reigning champions Iranians next setting up a tough clash against Chinese Taipei to determine the Pool A winners.

World No.10 Iran, which look forward to capturing the Asian title for three times in a row at home this time, became the only team yet losing a set in the top-notch competition. After thrashing Kuwait in comfortable straight sets in their opening match the previous day, Iran on Saturday faced a tougher situation and a tense battle against Kazakhstan.

In the opening set, the strong visitors performed exceptionally to foil Iran’s determined challenge which saw the opener turn out to be a hotly-contested match. However, Iran proved steadier to take the close first set 25-23.

Holding a 2-0 advantage, Iran played more comfortably in the third set. However, Kazakhstan came much stronger this time, matching Iran tactically and technically. Still, Iran played better at the final assault to win the closely-contested third set  27-25 and the match.

Iran’s head coach Peyman Akbari commented after the match: “The scoreboard showed how close we played, except in the second set. It was a very critical situation for Kazakhstan because if they lose the game they will dash their hopes of advancing to the the top eight teams. So they tried their best. They had some strong points including impenetrable defence which we had analyzed before and were good on attacks. Both teams were not so good on serves because we made several service mistakes but we were good on receiving. Overall, Kazakhstan played really well today and I congratulate their coach for his team’s nice play. I wish them a success in future games.”

Chinese Taipei, contesting the same Pool A as Iran, continued their winning streak on Saturday, demolishing Kuwait in straight sets 28-26 25-17 25-15 in their second match to next challenge the Iranians to decide the Pool winners.

In Pool B, Qatar, which the previous day played splendidly to overpower world No.13 Australia, proved again they are one of the strong teams to be reckoned with in the Asian Championship following their straight-set 25-18 25-19 25-22 win over India. The other match in this pool saw underdogs Turkmenistan suffer straight two losses. Going down to India in their opener, Turkmenistan found Australia too strong to lose 11-25 21-25 22-25.

In Pool D, China beat Japan in a rematch of the third-place playoff in the previous edition two years ago in Dubai, the UAE. The Chinese on Saturday powered past Japan in dramatic four sets 25-20 25-17 23-25 25-22 to remain unbeaten.

The preliminaries will continue on Sunday. At the completion of the pool round-robin preliminaries, top two teams from each pool will advance to the last eight teams, while the third and fourth teams will be relegated to compete in the 9th-16th playoffs. 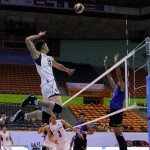 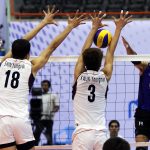 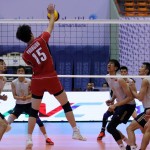 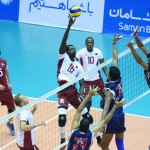 Qatar’s Ibrahim Ibrahim on his way to attacking India. 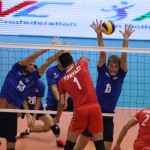