Tehran, Iran, August 2, 2015 – Title-holders Iran annihilated Chinese Taipei in comfortable straight sets 25-16 25-16 25-19 to end up their pool round-robin preliminaries with a clean sheet in the 18th Asian Senior Men’s Volleyball Championship, emerging as the only team yet losing a single set to their respective rivals while advancing to the round of last eight teams.

World No.10 Iran, hosts and reigning successive two-time champions, outclassed Kuwait and Kazakhstan in straight sets earlier to register the first two wins in Pool A. Against unbeaten Chinese Taipei in their last preliminary match on Sunday to decide the pool winners, Iran fielded the similar starting line-up as the previous two matches led by hard-attacking Pirout Pour Farhad, Zarini Hamzeh and Sharifat Mostafa, while Chinese Taipei were powered by the twin brothers, Liu Hong-Jie and Liu Hong-Min, both of them competed in the Asian Men’s U23 Championship in Myanmar a few months ago.

Iran came up with aggressive attacks, with Pirout Pour Farhad and Zarini Hamzeh penetrating the Taiwanese defence with their spectacular spikes and superb blocking by Sharifa Mostafa and Gholami R. Masoud to clinch the first two sets with the similar margin 25-16 25-16. Powerful cross-court spikes by Wu Tsung-Hsuan and Liu Hong-Min gave Chinese Taipei a strong challenge in the third set. However, showing a greater experience and tactics, Iran proved again they are the stronger side, beating the younger visitors to capture the set 25-19 and the match.

Pirout Pour Farhad led Iran with 16 points including 13 kills from 27 attempts, while Wu Tsung-Hsuan scored 12 points for Chinese Taipei, all of them from his deadly attack hits.

“Chinese Taipei played a good match against us. They put some of my players much pressure. As I said before, it’s so difficult to play a quick team like Chinese Taipei. Therefore, the only thing we can do is to trouble their reception,”  commented Iran’s  head coach Peyman Akbari after the match.

“My players learned this and that’s what counts for our victory. I think we are defensively and offensively stronger than Chinese Taipei. However, I have to thank all supporters who have never left us alone. They cheered us all the way.”

In the other Pool A clash, Kazakhstan found their touch to end up their preliminaries with an impressive 25-17 25-20 25-18 win over Kuwait.

In Pool D, China, another unbeaten team following their 3-0 win over Sri Lanka and 3-1 trump over Japan, played their last preliminary encounter against Bahrain. As expected, the tactical Chinese brushed off lower-ranked Bahrain 25-18 25-23 25-21.

At the end of the pool round-robin preliminaries on Sunday, Iran top Pool A with 9 points from straight three wins, followed by Chinese Taipei with 6 points from two wins against one loss. Kazakhstan and Kuwait formed the next two places with 3 and 0 points respectively.

Pool B was won by Qatar with 9 points from successive three victories, while Australia finished second with 6 points from two wins against one loss. India came in third place with 3 points, with Turkmenistan in empty hands after winless performance.

China made it three in a row to lead Pool D with 9 points, while Japan came in second place with 6 points from two wins against one loss. Bahrain and Sri Lanka had 3 and 0 points to finish third and fourth places respectively.

The second round resumes on Monday, with teams finishing top two from each pool advancing to the round of last eight teams to compete in Pool E and Pool F, with Iran, Chinese Taipei, Korea and Thailand taking on one another in Pool E.

The teams finishing third and fourth places from each pool have been relegated to 9th-16th classification round, competing in Pool G and Pool H. 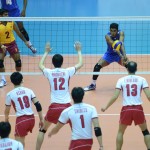 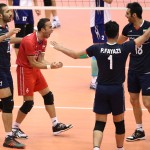 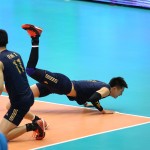 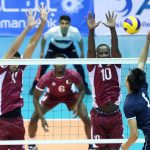 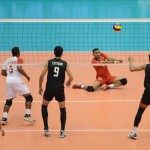 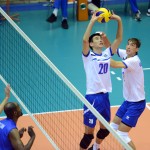 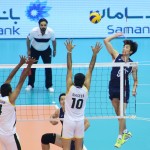