Tehran, Iran, August 3, 2015 – Reigning successive two-time champions Iran, the only team which have yet lost a set to their respective rivals, thrashed Thailand in lop-sided straight sets of the 18th Asian Senior Men’s Volleyball Championship on Monday to next go up against indomitable rivals Korea in a rematch of the previous episode’s final.

The sensational 25-20 25-11 25-20 victory over the world No.36 gave the host side a winning streak in the top-flight competition. Iran and Thailand competed in the pool plays of the last eight teams in Pool E, also joined by Korea and Chinese Taipei. The Iran’s next match against Korea on Tuesday can be a clash of the Titans as both sides have yet lost a match in the tournament. Iran powered past the Koreans in straight sets in the 2013’s final showdown to reign supreme for their second title in the biennial competition in Dubai, the UAE.

Before a large crowd of home audience at the Azadi Sports Complex Hall 1, world No.10 Iran, chasing dreams of clinching the Asian crown three times in a row on  home soil this time, fielded a strong line-up as the previous matches including Fayazi Damnabi Purya, Sharifat Mostafa, Zarini Hamzeh and Pirout Pour Farhad, while Thailand were strengthened by ace spiker Jirayu Raksakaew, playing on his birthday, Kissada Nilsawai and Kittikun Sri-utthawong.

Thailand started strongly and coped well with the Iranian tactics which saw both sides in full strength to fight for points. However, Iran, despite fielding their B team in this championship, proved to be much stronger than the challengers to take the thrilling opening set 25-20.

In the second set, Fayazi Damnabi Purya combined well with Pirout Pour Farhad in solidly blocking the Thai attacks. Though Thailand attempted to come up with more challenges, they became more prone with unforced mistakes. Iran seized the golden opportunity to hit back mightily to win the totally one-sided battle 25-11.

Holding a 0-2 disadvantage, Thailand pulled their game together and played much better in the third set. Still, Iran, cheered on by home spectators, most of them making nerve-wracking noises while blowing small, portable air horns, performed exceptionally well in foiling the Thais’ attacking attempts. Iran won the exciting set 25-20 and the match.

The other Pool E match saw Korea in top form to thrash Chinese Taipei in comfortable straight sets 25-15 25-20 25-17. Chinese Taipei next take on Thailand on Tuesday.

In the other pool of the last eight teams, powerful Qatar pulled off an exhausting, hard-fought 25-19 25-23 15-25 19-25 17-15 victory in an epic clash against Japan in Pool F. Kunihiro Shimizu emerged as a scoring machine of Japan to bag massive 27 points including 26 kills from 47 determined attempts. Ibrahim Ibrahim led undefeated Qatar with 16 points including 11 kills and four stuff blocks.

China, another team which have yet lost a match in the competition, struggled to stun world No.13 Australia in a closely-contested battle 25-23 25-21 26-24 in the other Pool F encounter.

China next challenge Qatar on Tuesday in a tough match to vie for a top spot in Pool F, while Australia take on Japan. 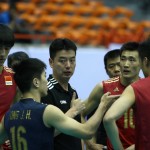 China get a tip from their coach Xie Guochen to play Australia. 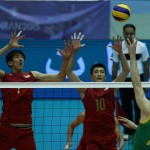 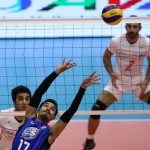 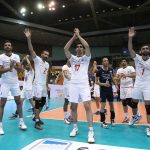 Iran thank all their fans supporting them inside the Azadi Sport Complex Hall 1. 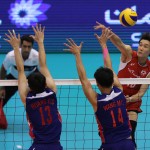 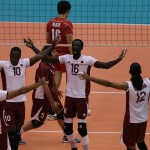 Qatar celebrate their victory over Japan.