Hisamitsu Springs comfortably took the first set 25-18 in their crucial quarter-final clash against the much taller Zhetyssu, but struggled to clinch the next two sets 25-20 25-23.

“The Kazakhs are very tall and we found it very difficult to spike. Additionally, we made a lot of mistakes. Fortunately, we did a good job on service and we could adjust the tone of the game. We did well after that. In the third set,we suffered on receiving. We did not play our style. Against Taiwan Power in the semi-finals, I admit that they are very quick, but we will try to improve on our defence and find out how to get points in the game. We will do our best,” Koto Yoichi, head coach of Hisamitsu Seiyaku Springs, commented after the match.

Unlike Hisamitsu, Taiwan Power on Friday faced an easier job against Petron Blaze Spikers when they showed no mercy to the Philippine side to thrash them in a one-sided battle 25-20 25-16 25-9 victory.

“We did not play well. Our team’s tempo was not good and that’s why our start was far from expectation in the first two sets. Petron Blaze Spikers also did not play well, while my team  dropped from our best. Our next match is likely to be against Japan’s Hisamitsu Springs, which are very  strong. However, if we happen to lose in that match,  it’s still okay if we perform well up to our standard. In this match against Petron Blaze Spikers, Chen Wan-Ting can be our best spiker, while Wu Shu-Fen is the best middle blocker of our team. We now have to go back for more training in preparation for the next tough match against the Japanese team,” said Lin Ming-Hui, head coach of Taiwan Power.

“We played well in this match against the hosts. It’s an easy match. In the first set, my players felt a little bit nervous and they could not play that well. We next take on Thailand. The Thais  had comprehensive skills, but they are not strong enough. I think we are much stronger than them,” said a confident Wu Sheng, head coach of Zhejiang, after the match.

“We dropped our form in the third set. My players underestimated the rivals. They might think that it was too easy winning the first two sets. I’m so afraid that if we have to play them in the fifth set, we might go down again as we faced the similar situation as we did in the crucial match against Chinese Taipei’s Taiwan Power. Fortunately, we served well and improved on our blocking attempts. Now, I’m so happy that we won this match because we have already fulfilled our target of making it to the semi-finals. If we happen to beat China’s Zhejiang in the semi-finals, that’s our benefit. We have to make a good plan in the next tough match against the Chinese,” commented Bangkok Glass’ head coach Kittipong Pornchartyingcheep.

The competition will run through Sunday, the final day of the nine-day championship which will guarantee the eventual winners the lone ticket from Asia to contest the next year’s FIVB Volleyball Women’s Club World Championship. 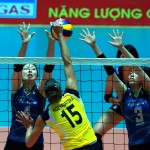 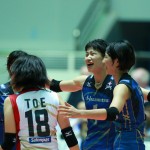 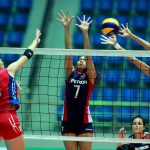 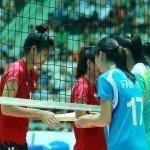 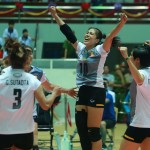