The pulsating hard-fought 17-25 20-25 25-16 25-23 15-12 victory over Thailand League and Super League champions Bangkok Glass helped national Chinese Taipei team, competing under the Taiwan Power’s banner, move to top the Pool A standing with 8 points from straight three wins. Taiwan Power became the first team which completed their pool round-robin preliminaries as there are only four teams in Pool A.

“This game is very difficult. The Thai team are very strong. My players know it would be a tough match and they had a lot of pressure taking on them. After the loss in the first two sets, I supported my players, telling them to play according to training. They played more relaxed. The more they played happily, a better game they produced. Now, we top Pool A,” said Taiwan Power’s head coach Lin Ming-Hui after the match.

“However, from now we have no match to play for three days, it’s not good for us to stop competing. If possible, I would like my team to continue training. We might face the Iranians in our next match. Our initial target was to finish among top four, but now we eye an higher target. We want to finish top three. After  beating the Thai team, we have boosted confidence. We have never beaten any Thailand team for long time. Now, my players have been increasingly confident of playing and I think we stand a chance of fulfilling our dream,” he added.

Going down in straight two losses 17-25 20-25, Taiwan Power came to life in the third set when deadly southpaw Chen Wan-Ting performed superbly to tear the Thai defence into shreds with her spectacular attacks for the Taiwan Power’s comfortable 25-16 win in the set.

Bangkok Glass put their acts together in the fourth set to take a commanding 19-12 lead and stood a good chance to win the set and the match. However, they just let the victory slip through their fingers when the Thai players dropped from their best form, allowing the spirited opponents more attacking opportunities. Taiwan Power caught the Thais at 23-23 and went on their terrific form to win the dramatic set 25-23.

Both sides gave it all out in the do-or-die tie-breaker, but the Taiwanese team came up with an markedly-improved performance. They spiked, boosted and dropped, using their amazing speed and power at the net performance. Taiwan Power eventually captured the decider 15-11 and the exhausting clash.

The Korean team were playing without their best player Jong Jin Sim, who emerged as the top scorer in their opening match against the Philippines’ Petron Blaze Spikers and who won the MVP award at the recent VTV Cup in Bac Lieu, Vietnam. She sustained a serious back injury after her team’s first match against Petron Blaze Spikers on the first day. The Japanese team also rested their Montenegro-imported Tatjana Bokan.

Hisamitsu, which beat Tianjin to be crowned the Asian Women’s Club champions in the previous episode in Nakhon Pathom, Thailand, have already suffered their first loss at the hands of China League champions Zhejiang the previous day. The scintillating straight-set win over the Koreans on Monday has raised the Japanese’s spirit and confidence for more matches to come.

“I’m very happy that my team won this match to get points. It’s our first win in this tournament as we lost to Zhejiang the previous day. We think about the match against the Chinese why we lost to them. We trained much harder to win the remaining matches. We played well in this match against the 4.25 Sports Club. They did not have No.3 Jong Jin Sim and it was a big difference. However, they still had good defence and were quick, allowing us much  trouble. We have to keep going our style in the next stage we will play. If we take on the Chinese team again, we have to show the audience the Japanese volleyball and try to win in that match,” Hisamitsu Seiyaku Springs Kato Yoichi commented after the match. 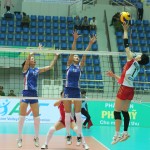 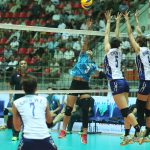 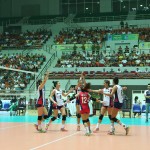