Ha Nam, Vietnam, September 16, 2015 – China League champions Zhejiang, title-holders Hisamitsu Seiyaku Springs and Bangkok Glass captured scintillating wins on the last day of the pool round-robin preliminaries of the 2015 Asian Women’s Club Volleyball Championship at the Ha Nam Gymnasium on Wednesday, as Taiwan Power and Zhejiang made a clean sweep to top their Pool A and Pool B respectively.

Li Ying led Zhejiang with 11 points, 10 of which through her attack hits, while Aleona Manabat-Santiago scored a match-high 14 points including 11 kills from 23 attempts for Petron Blaze Spikers.

“We played well in the first set and after that we changed a few players from the substitutions. We just wanted our best players to have a rest and prepare for the match of the next round. Now, we top Pool B and are likely to take on Vietnam’s Thong Tin Lienvietpost Bank. I’m confident that my team will beat them as we have the better quality. We try to do our best one at a time in this competitive competition,” commented Wu Sheng, head coach of Zhejiang, after the match.

“Rika Nomota did a great job in this match. We did a little change of players. We want to be a little bit more stronger and that’s for a good game we did today in this match against the Iranians. We are second in Pool B and might take on Kazakhstan’s Zhetyssu in the next match. They are very tall and we have to learn how to cope with fighting with the taller players and how to attack the high blockers. If we happen to beat the Kazakh team, we will do our best to win the semi-finals for a place in the final. After that, we will give all out again to win the final and the title,” Kato Yoichi, head coach of Hisamitsu Seiyaku Springs, commented after the match.

“Everyone played well according to the strategic plan, just a few mistakes my players made including blocking. Wilavan (Apinyapong) produced good blocking today. However, I’m happy that we served much better than our previous matches. I replaced Rassamee (Supamool) with Sutadta (Chuewulim) and she did a good job. Our next match will be against DPR Korea’s 4.25 Sports Club. They have been competing as a team for a long time and they also trained overseas in Europe. Therefore, they should be a strong team to be reckoned with,” Bangkok Glass’ head coach Kittipong Pornchartyingcheep commented after the match.

“If we can keep our standard like we did in this match against the Vietnamese, I think we can beat the Koreans. However, we will try to do our best one at a time. We have to firstly aim at the round of last eight teams. If we beat the Koreans, we then eye for a higher target. I wish my team made it to the latest round.”

At the completion of all nine participating teams in their pool round-robin preliminaries on Wednesday, Taiwan Power of Chinese Taipei top Pool A with eight points from straight three wins, followed by Bangkok Glass with seven points from two wins against one loss. Kazakhstan’s Zhetyssu came in third place with three points from one win against two losses. Hosts Thong Tin Lienvietpost Bank did not win a match to finish fourth in Pool A.

Zhejiang captured the top spot in Pool B with 11 points from consecutive four wins against no loss. Hisamitsu Seiyaku Springs collected 10 points from three wins against one loss to finish second in the pool. The 4.25 Sports Club from DPR Korea had six points from two wins against two losses to claim the third place, with Petron Blaze Spikers finishing fourth place with three points from one win against three losses.  Islamic Azad University did not win a match to finish fifth in Pool B and crashed out from the competitive competition with a ninth position overall.

Therefore, the quarter-finals on Friday will see Taiwan Power take on Petron Blaze Spikers, Bangkok Glass challenge 4.25 Sports Club, Hisamitsu Seiyaku Springs play Zhetyssu and Zhejiang meet Thong Tin Lienvietpost Bank. The winners will next advance to the semi-finals, with the losers relegated to the 5th-8th classification round. 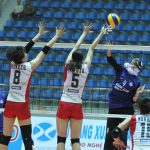 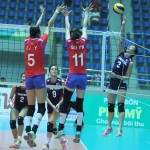 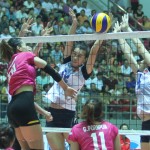