The team briefing and drawing of lots took place on October 7, with all participating teams comprising Kazakhstan, New Zealand, China, Australia, Qatar, Japan, Iran, Thailand, Oman, Indonesia, Philippines, India, Hong Kong, Maldives and Timor Leste taking part in the technical meeting, while the competition will be held for four days from October 8 to 11.

On the opening day of the competition on Thursday, strong teams brushed off unfancied rivals in comfortable straight sets. However, Thailand’s Varapatsorn Radarong/Tanarattha Udomchavee, silver medallists at the last year’s Asian Beach Games in Phuket, Thailand and the Asian Games in Incheon, Korea, enjoyed a mixed fortune in the women’s event.

The Thai third seeds, who failed to make their mark in the last week’s AVC Women’s Beach Volleyball Championship in Hong Kong to finish a disappointing shared ninth place, successfully cleared their first hurdle in Pool C following the effortless 21-12 21-17 win over Indonesians Ratnasari Desi/Riswardani Bela, but later in the afternoon encounter found Japanese Miki Ishii/Megumi Murakami too strong to go down 17-21 19-21 in their second clash in the pool plays.

Desi/Bela suffered their second loss after being sent packing 9-21 12-21 in just 28 minutes to Kazakhstan’s Bakhtygul Samaliova/Yekaterina Lassyuta and had to crash out from the competition.

Kazakh top seeds Tatyana Mashkova/Irina Tsimbalova, champions at the last year’s Asian Beach Games in Phuket, Thailand and a joint fifth place at the Hong Kong meet, got the four-day competition off to a flying start with a convincing 21-17 21-12 win over Thailand’s Khanittha Hongpak/Rumpaipruet Numwong in Pool A. Earlier, the Thai duo had already succumbed their 18-21 15-21 defeat at the hands of Japanese Ayumi Kusano/Akiko Hasegawa. The successive two losses allowed the Thai eighth seeds an early exit from the tournament.

In the men’s competition, top four seeds received a first-round bye in the pool round-robin competition on Thursday. Alexey Sidorenko, who teamed up with Alexandr Dyachenko to capture the gold medal at the last year’s Asian Games in Incheon, Korea, has switched to partner Dmitriy Yakovlev as top seeds this time. The Kazakh duo struggled hard to beat Indonesians  Fahriansyah Fahriansyah/Ashfiya Mohammad with a comeback 18-21 21-17 15-12 win in their Pool A encounter.

In Pool B, New Zealand’s second seeds Sam O’Dea/Michael Watson had a dismal start in the four-day tournament after losing 16-21 17-21 to Indonesians Ade Rachmawan/Rendy Licardo, while the Chinese third seeds Li Zhuoxin/Li Jian also lost their touch in their opening match on Thursday. After claiming the first set without much difficulty 21-10 in their match against Oman’s Haitham Alshereiqi/Ahmed Alhousni, the Chinese pairing could not maintain their impressive form to go down in the remaining two sets 16-21 10-21 for a 1-2 letdown in Pool C.

The pool plays continued through Friday before the drawing of lots will be held to decide the match schedule of the next round on Saturday, which will see teams finishing second in each pool drawn to take on the pool winners. 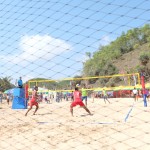 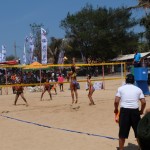 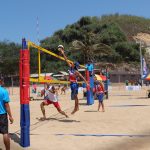 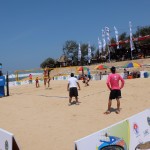