Jogjakarta, Indonesia, October 10, 2015 – Two Australian pairings cruised their ways into the semi-finals in the women’s event, as top four seeds failed to make their mark in the men’s competition on the third day of the US$37,000 AVC Beach Volleyball Tour – Indonesia Jogjakarta Open at the Sepanang Beach on Saturday.

Australian second seeds Mariafe Artacho Del Solar/Nicole Laird, bronze medallists at the last week’s AVC Women’s Beach Volleyball Championship in Hong Kong, pulled off an effortless 21-12 21-10 victory over Japanese Ayumi Kusano/Akiko Hasegawa in 35 minutes to storm their ways into the do-or-die semi-finals, where they are due to take on Thai third seeds Varapatsorn Radarong/Tanarattha Udomchavee, second place at the last year’s Asian Games in Incheon, Korea and the Asian Beach Games on the same year in Phuket, Thailand.

The Thai duo on Saturday overpowered Kazakhstan’s Bakhtygul Samalikova/Yekaterina Lassyuta 21-14 21-13 in the elimination round. Radarong/Udomchavee still shone through their exceptional form in the quarter-finals to stun crack Japanese rivals Miki Ishii/Megumi Murakami 22-20 21-14 for a semi-final spot.

Australian fifth seeds Jordan Mowen/Becchara Palmer also proved a strong team to be reckoned with in this top-fight competition. The Aussies first breezed past Indonesians Ayu Siam/Eka Yokebed 21-12 21-16 in the elimination phase and pulled off a stunning comeback 18-21 21-18 16-14 win in a hard-fought thriller against Kazakh top seeds Tatyana Mashkova/Irina Tsimbalova, gold medallist at the last year’s Asian Beach Games in Thailand.

The consecutive two wins have carried the Australian duo to the semi-finals, where they are due to challenge Tang Ningya/Chen Chunxia. The Chinese tandem were in devastating form on Saturday. After a convincing 21-12 21-7 win in a totally lop-sided 24-minute battle against Indians Rajan Thirumahalakshmi/Maheswari Jayaraman, the Chinese produced a magnificent come-from-behind 14-21 21-1915-9 win over local hopefuls Dhita Juliana/Putu Utami, bronze medallists at the last year’s Asian Beach Games.

Meanwhile, Iranians Saleminjehboroun/Raoufi shattered Ha Likejiang/Bao Jian’s dreams of advancing to the next round by coming from behind to beat the Chinese duo 19-21 21-15 15-11. Saleminiehboroun/Raoufi later powered past Saber Houshmand/Abbas Pourasgari in the all-Iranians quarter-final clash for a spot in the semi-finals.

The semi-finals will be held on the Sunday morning, with the winners advancing to the afternoon’s final showdown and the two losers battling it out in the third-place playoff. 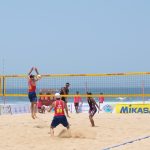 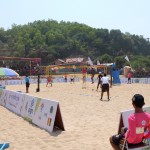 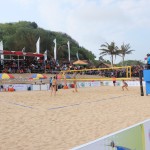 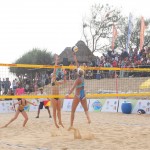 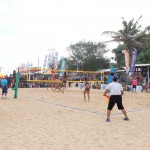