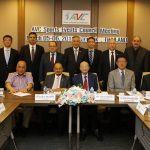 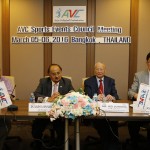 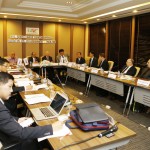 Bangkok, Thailand, March 5, 2016 – AVC Sports Events Council members have been asked to provide their expertise to the organisers of the AVC tournaments to help run those top-notch competitions smoothly, as all 2016 major events were officially confirmed to be held later this year.

The AVC Sports Events Council and the AVC Development and Marketing Committee were the first two AVC Technical Committees which kicked off their annual meetings on Saturday at the Dust Princess Srinakharin Hotel, with the former led by the secretary-turned-chairman Dr Eom Han-Joo from Korea and the latter chaired by Mr Ramon Suzara from the Philippines.

“I’m very happy to be here for the AVC Sports Events Council Meeting. AVC is the biggest Confederation with 65 member countries and FIVB, therefore, saw strategic importance of our Confederation. I hope the Council members, many of them newcomers, will throw their full efforts in their responsibilities and assignments for the sake of the great success of AVC Volleyball,’ Dr Nasser gave his opening speech before the start of the meeting.

The meeting approved the Minutes of the 2015 AVC SEC Meeting in Bangkok before proceeding to the reports, comments and recommendations of the 2015 AVC tournaments, allowing those in charge of controlling some certain competitions as technical delegates chances to speak out and comment on the problems they faced while on duty.

SEC Chairman Dr Eom has asked members who might be nominated to be delegates in a future competition to provide their technical expertise and ability to the organisers of the AVC tournaments to help make them great successes.

Later on, Mr Shanrit, who decided during the AVC General Assembly in Saudi Arabia last November to step down from the position of AVC SEC Chairman, reported on the FIVB SEC Meeting in Lausanne on February 2-3, 2016, explaining about the updated system for the Preliminary Enquiry and General Technical Meeting. According to Shanrit, the General Technical Meeting has been cancelled for the World League and World Grand Prix, but remains optional for other tournaments. In terms of the Press Conference, it’s still compulsory that the activity should be held prior to the competition, with the Press Delegate, Coach and Captain in attendance.

The proposals from 2016 Commission Meeting were also taken into consideration in the Saturday’s meeting including change of the name of the TV and New Media Commission to TV & Digital Commission, while the number of teams in the competitions such as under age categories, according to the Finance Commission, should be reduced.

Shanrit also confirmed that the World Olympic Qualification Tournament to be hosted in Japan in May will feature eight teams to play a single round-robin competition, with the first priority for the team to make the cut for the Rio Games being the Best-ranked Asian team, followed by the top three-ranked teams (if an Asian team are ranked among top three, then the next ranked team will be qualified.)

Aside from the World Olympic Qualification Tournament, a look ahead for the future competitions was also one of the main topics raised in the meeting. As the draw of lots ceremony for the 18th Asian Men’s U20 Championship in Chinese Taipei and the 18th Asian Women’s U19 Championship in Thailand is due to be held on Sunday, March 6, the second day of the AVC SEC Meeting, Kazakhstan has confirmed to become the candidate country in case India cannot host the 8-team AVC Cup for Men in September.

Meanwhile, all six AVC tournaments to be held this year have been confirmed on Saturday, with Chinese Taipei hosting the 18th Asian Men’s U20 Championship from July 9 to 17 and Thailand the 18th Asian Women’s U19 Championship in Nakhon Ratchasima from July 23 to 31. Myanmar will be the battle ground for the 2016 Asian Men’s Club Championship between August 23 to 31 and the 2016 Asian Women’s Club Championship will take place in the Philippines during September 3 and 11. Vietnam will host the 5th AVC Cup for Women from September 12 to 18, with India still uncertain of being able to host the 5th AVC Cup for Men from September 19 to 25.

He also informed the meeting that the hosts of the 2016 FIVB Men’s and Women’s Club Championships have yet been confirmed, while the 2018 World Championship Qualification first round in both men’s and women’s competitions is due to kick off this coming September. So far, a total of 23 men’s teams and 18 women’s sides have registered for participation, while four teams apiece from both categories will qualify for the World Championship Finals.