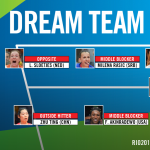 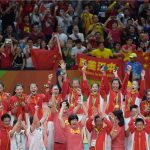 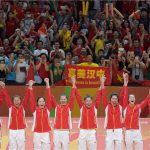 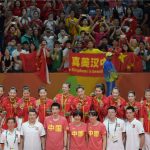 Zhu, who was selected the Most Valuable Player, finished as the top scorer of the competition with a total of 179 points including a tournament-high 33 in the semifinals against Netherlands. She capped her participation with 25 points as the main Chinese weapon in the triumph.

China climbed to the top step of the podium for the third time in the history of volleyball at the Olympic Games and first since Athens 2004. They also won the gold medal in Los Angeles 1984, a silver medal in Atlanta 1996 and bronze medals in Seoul 1988 and also at home in Beijing 2008.

In the process, China’s Lang Ping became the first woman to win a gold medal as a player in Los Angeles 1984 and repeat the feat now as a coach in Rio de Janeiro.

The silver medal for Serbia is their best finish in three Olympic appearances after concluding fifth and eleventh in Beijing and London, respectively.

After a slow start, China recovered composure playing excellent defence to back the brilliant performance of Zhu who was the daily highest scorer in five of the eight days of the competition, including the last four in a row.

China’s Hui Ruoqi and Yunli Xu contributed 13 and 12 points in the victory, while Xinyue Yuan added 9, including three blocks.Tijana Boskovic and Milena Rasic were the top scorers for Serbia with 23 and 16 points, respectively, and Tijana Malesevic and Brankica Mihajlovic finished with 11 apiece in the loss.

Serbia’s hot start combined with some sloppy plays by China leading to a 12-8 score in favour of the European side. Yuan scored with spike and block to reduce the gap to 12-10 before Boskovic’s spike sailed long for a one-point difference. Then Rasic restored order with her spike and second and third aces of the set. Serbia took the first set 25-19 playing text-book volleyball.It was the other side of the coin in the second set as Serbia came down back to earth while China improved their game to take a four-point lead at 12-8 with run that included aces by Ding and Hui. The floating serves and the attack led by Zhu powered China to a 25-17 result.

In the third set, Xu broke a 6-6 tie scoring with a fast play down the middle and the imitated Hui with a block to provide China with a three-point lead.

China expanded the distance to 15-10 but Serbia came back to cut the gap to 21-20 with spike and block by Rasic around an ace by Mihajlovic. However, Zhu drove China home 25-23 scoring with spike and ace.The fourth set was a close battle until Zhu scored twice around an opponent error for a 16-13 lead. With Mihajlovic and Boskovic both on the bench, Serbia closed in to 19-18 with consecutive spikes by Malesevic and Veljkovic. Serbia tied at 20-all via opponent error. Then at 23-all Rasic served out of bounds and China won 25-23 with the spike by Hui after the serve of Zhang returned to the Chinese side of the net.