Nakhon Ratchasima, Thailand, July 31, 2016 – Indomitable China underlined their dominance over the SMM 18th Asian Women’s U19 Volleyball Championship after capturing a gruelling hard-fought five-set thriller against closest rivals Japan in a clash of the Titans on Sunday.

The dramatic 25-20 21-25 25-22 14-25 16-14 victory handed China the 12th title in the biennial top-flight competition. However, by finishing top two teams in the prestigious tournament, China and Japan have secured their tickets to contest the next year’s FIVB Women’s U20 Volleyball World Championship in Mexico.

China have advanced to the final showdown in the Asian meet for 15 times, 12 of them successful. Among 15 finals, China were beaten by Japan only for three times, but they went on to beat the similar rivals for 7 times.

The tense battle between the two invincible teams got off to a thrilling start with both sides opening up with exceptional performances. As China, fielding formidable players with the likes of powerful hitters Wu Han and Cai Xiaoqing, used their height advantage to attack devastatingly, the Japanese relied on their solid defence and sharp spikes led by half-Japanese, half-Kenyan Reina Tokoku. The score was tied at 17-17 before China sent in Yang Hanyu, the tournament’s tallest player with the height of 195cm, and she became the China’s Great Wall to foil the Japanese attacking attempts. China clinched the hard-fought first set 25-20.

The second set was more thrilling when both sides came in full strength to trade points which saw leads changed hands for several times. However, Japan played better with more consistency to take the set 25-21.

China continued their remarkable run in the third set to lead Japan all the way before Japan fought back hard to catch them at 20-all. Nonetheless, the Chinese attacks remained on target as they allowed the determined rivals two more points to wrap up the hotly-contested set 25-22.

Japan started the fourth set strongly to take an early 10-4 lead, thanks to their splendid teamwork defensively. The Chinese found the Japanese a tough nut to crack as the latter shone through their combination attacks and scintillating blocking. Leading a commanding 20-10,  Japan did not look back, winning the set in style 25-14.

The decider was very close as both sides were just never-say-die. As China led 14-13, needing only  one more point to capture the set, but Japan held their nerves and hit back to force deuce at 14-14. However, the Chinese fared better at the final assault. The 195cm Yang Hanyu came at the right time to effectively block a fierce attack from Reina Tokoku. China won the thrilling set, match and their 12th title.

The end of the competitive competition sparked dramatic scenes as the winners Chinese jumped for joy, hugged one another and ran around the court to thank all their fans, the losers Japan were in tears and left the court with heads low in disappointment.

Cai Xiaoqing scored a match-high 20 points for China including 19 kills from 48 attempts. Wu Han and Qian Jingwen added 18 and 13 points respective on attacks.Yang Hanyu assisted with 4 points on blocks. Ai Kurogo also led Japan with 20 points, but only 17 of them through her powerful hits. The remaining 3 points came from her ace serves.

Thailand beat the Vietnamese for the second time on their opening match at the Pool D group round-robin preliminaries in the Asian meet in Nakhon Ratchasima before delighting home fans with a 3-1 (25-11 22-25 25-19 25-8) comeback in the Sunday’s third-place playoff.

Earlier, Korea, which finished third place at the previous edition in Chinese Taipei two years ago, had to content with the fifth place this time when they struggled hard to beat Chinese Taipei in a gruelling 132-minute, hard-fought five-set thriller 26-28 25-15 16-25 25-22 15-8. Chinese Taipei came in sixth position.

Kazakhstan claimed the seventh place after producing a comeback 3-1 (22-25 25-22 25-14 25-10) victory over India. Kazakh Kim Mariya and Indian Vala Kinjalben similarly scored 13 points for their teams, but the former emerged as the match’s best scorer as she added 4 points on ace serves. Anastasia Kostenko added 7 points on blocks to the Kazakhstan’s tally.

In the awards presentation, eventual winners China stepped on the top level of the podium to capture the Champions Cup. Japan finished second, with Thailand in third place. Among the eight individual awards given aways, China took 4 awards including Wu Han’s Most Valuable Player and Yasu Yukako’s Best Libero Awards. 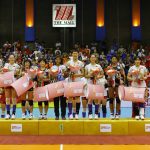 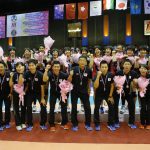 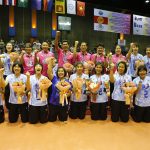 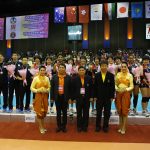 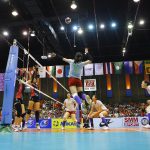 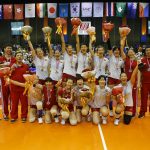 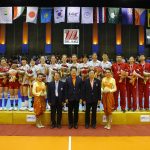