Nakhon Pathom, Thailand, September 28, 2016 – Iran underlined their supremacy over the “SMM” 5th AVC Cup for Men at the Nakhon Pathom Gymnasium after overpowering arch rivals China with a magnificent comeback 3-1 (23-25 25-23 25-21 25-21) victory in the heart-pounding, hard-fought final showdown on Wednesday.

China were pitted against world No.7 Iran in their third final in the biennial competition on Wednesday. The Chinese went down to hosts Iran in the 2010 final and avenged the loss to the old foes in 2012 in Vietnam to capture their first AVC Cup title, while Iran have already captured two AVC Cup titles. They won the inaugural AVC Cup in 2008 in Nakhon Ratchasima, Thailand  following a sensational win over Korea in the showdown and repeated the similar feat at home when they beat China in the final clash two yeas later in Urmia.

Both teams were unbeaten en route to the climax on Wednesday. China remained strong in their line-up with the likes of Ji Daoshuai, Li Yuanbo and libero Ke Junhuang, all of them played in this year’s FIVB World League Group 2. Powerful attackers Liu Libin and Jiang Chuan also strengthened the Chinese side.

Iran were formidable on Wednesday with experienced players at the helm including Mohammad Taher Vadi, Rahman Davoodi and Alireza Mobasheri.

After the match, the Iranians jumped for joy and danced around. They also threw veteran Alireza Behbodi to the air. Behbody, 37, will call it a day from the Iran national team after this,

“It’s very difficult match. We had to try very, very much. Actually, we mainly focused on this match. We lost the first set and in the second set, we trailed China by 4-5 points. However, we believed that we could win. So, we continued the fightback and that’s why we could beat a very strong team from China. I would like to give the credit of this winning to the people of Iran. I would also like to congratulate the Iranian people for their kind support to our  team. I thank the staff of the Iran Volleyball Federation, the IVF President as well as our team staff. Everyone played a vital role in our winning. Last but not least, I would like to thank all my players. They played with hearts. They did a good job,” Iran’s head coach Shahnazi Naser commented after the match.

“It was a tough match for us. We did our best. In the second set, Chinese Taipei came up with great serves and we could not cope with their tactics. These Japanese players will now have a bright future as we are preparing them for the Tokyo Olympics in 2020. It’s a pity we could not make it to the final as we have initially eyed for the gold medal. However, the third place is not that bad,” Japan’s head coach Shingo Sakai commented after the match.

Meanwhile, the remaining playoffs earlier saw Kazakhstan prove too strong for Australia to take home the fifth place after brushing off the rivals in straight sets 25-17 25-17 25-21.

Hosts Thailand stun defending champions Korea in convincing straight sets 28-26 25-17 25-17 to take the seventh place, bettering their 8th-place finish at the previous edition in Kazakhstan two years ago. Korea, which powered past India in the final showdown to reign supreme in 2014, fielded a fully-fledged team players from Korean universities this time and had to finish at the bottom among all participating eight teams. Last week, Korea also finished eighth position at the AVC Cup for Women in Vinh Phuc, Vietnam, giving the Koreans the eighth place in both men’s and women’s teams at this year’s AVC Cup. 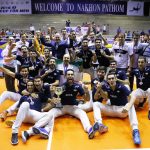 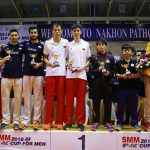 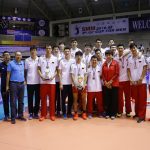 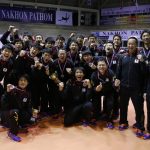 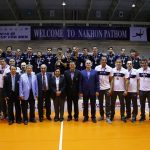