Bangkok, Thailand, September 15, 2020 – Asian Volleyball Confederation on Tuesday announced the eight potential Candidates who will next take the final step in the selection process for the Euro/Asia Coaches Cooperation Project.

The video interviews came after the first round was held in the selection process when a total of 16 candidates from 14 AVC Affiliated National Federations comprising two each from Afghanistan and Thailand and one apiece from China, DPR Korea, Mongolia, Iran, Pakistan, Sri Lanka, Bahrain, Lebanon, Palestine, Australia, Palau and Singapore had initially confirmed participation in the project.

Six applicants were not selected as their qualifications did not meet the selection criteria set by the AVC Coaches Committee earlier – candidates must be either volleyball coaches working with underage categories or players at the end of their career with willingness to develop professional coaching career. They must have a proficient level of speaking and writing English, while age and experience are not exclusive despite the fact that not over 35 is desirable. With six applicants falling at the first hurdle, only 10 Candidates took the second round of the selection process via the above-mentioned video interviews.

The video interviews were held on September 8 for each Candidate to speak directly to the Coaches Committee Members, who evaluated the Candidates’ qualification, relevant experience and their motivation in applying for the unprecedented development project and moved them through the Candidate selection.

Following the interviews, the AVC Coaches Committee selected the eight well-qualified Candidates, then informed the AVC Board of Administration for approval before making an official announcement of the selected eight Candidates on Tuesday.

These eight AVC Candidates will join the other eight selected in the similar process by CEV for the last interviews to be jointly conducted by AVC Expert Mr G.E. Sridharan from India and CEV Expert Mr Gert Vande Broek from Belgium.

Out of 16 Candidates attending the video interviews with the two Experts, only four apiece including one female from each continent (8 in total from both continents) will be finally selected to attend the Euro/Asia Coaches Cooperation Project.

The date for the video interviews with the two Experts has yet to be determined, but the names of the last eight candidates/coaches retained to join the programme is expected to be confirmed by October 15, 2020. 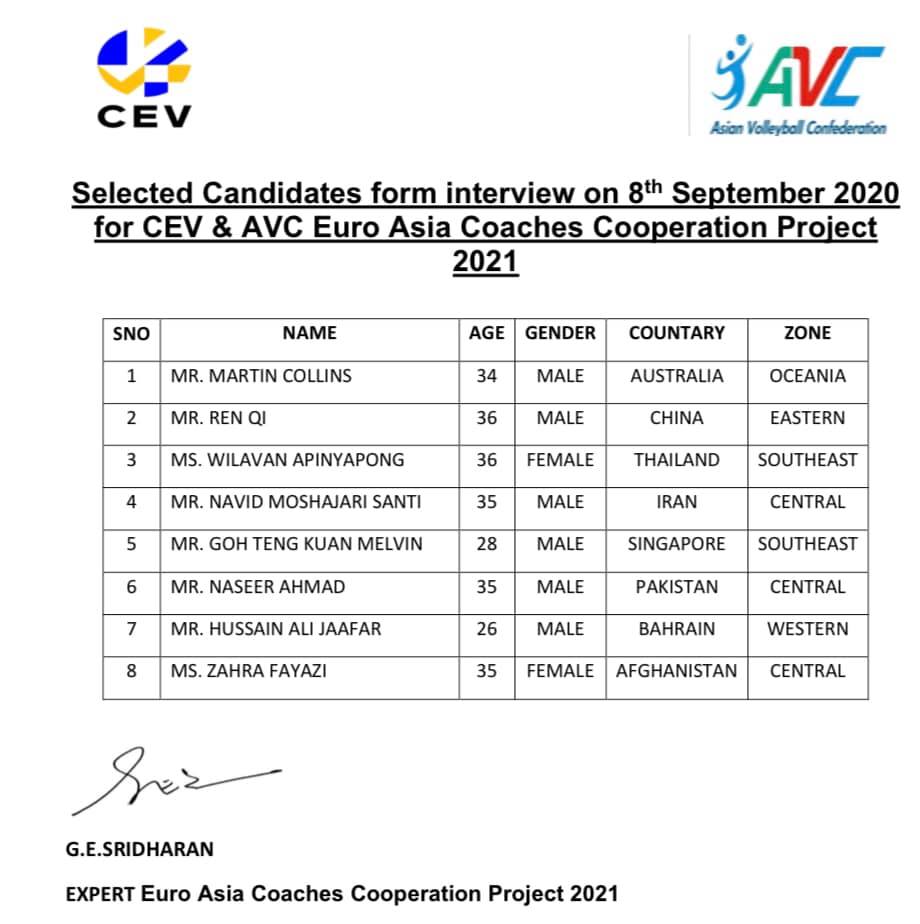