AND THEN THERE WERE THREE: JAPAN, USA, TURKEY GO UNBEATEN INTO VNL WEEK 2

Home / Slider / AND THEN THERE WERE THREE: JAPAN, USA, TURKEY GO UNBEATEN INTO VNL WEEK 2
By PreechachanIn
Slider Volleyball News

The five undefeated teams of Day 2 at the 2021 FIVB Women’s Volleyball Nations League turned into three at the close of the first week of play on Thursday, as USA downed Brazil and Russia lost to the Netherlands – leaving Japan on full points and a clean slate in sets, followed by defending champions USA in second place and Turkey a point behind.

Check out the full standings https://en.volleyballworld.com/volleyball/competitions/vnl-2021/standings/women/

In a rematch of the 2019 final, Sarah Wilhite scored 25 points and kept USA undefeated – a feat that they’ll try and carry through into Week 2, as of Monday, when come up against opposition from other continents in Week 2: Serbia, the Netherlands and Thailand. 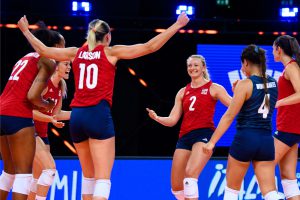 It will be interesting to see how coach Karch Kiraly further utilises the vast depth of his team in their next three matches.

Brazil will also need to regroup when they face table leaders Japan next week in the highest-ranking of matches.

Earlier in the day on Thursday, Sarina Koga led Japan their third straight-set win of the week, a solid victory over Korea. The dynamics are sure to change next week, though, when Japan face Brazil, Italy and Russia. Can Japan keep it up?

In other action on the closing day of the first week, Turkey overcame a shaky Poland to also stay undefeated, with Ebrar Karakurt sharing the match high of 26 points with her opponents’ Magdalena Stysiak.

But Turkey will now face a different kind of opposition when they take on Canada, Germany and China in Week 2.

Stysiak is now the top scorer of the tournament, but she’ll have to keep it up if Poland are to make something out of this tournament.

Check out the individual rankings of players
https://en.volleyballworld.com/volleyball/competitions/vnl-2021/statistics/women/best-scorers/

Russia, however, have been struggling after their strong opening and suffered their first defeat in the tournament, going down to an enthusiastic Netherlands in four sets on Thursday, as coach Sergio Busato brought on some of his younger talent after a disastrous first set – including 17-year-old Arina Fedorovtseva who scored the joint match high of 18 points alongside her teammate Kseniia Smirnova.

Watch out for the two when Russia need to redouble their efforts in Week 2 against the likes of Italy, Brazil and Japan.

But the highlight of the tournament so far has certainly been the new generation of world champions that Serbia are preparing to keep their country at the very top of international volleyball.

After conceding a very tight match to Turkey on the opening day, Serbia rebounded with back-to-back victories – including over hosts Italy on Thursday night – coming back from 22-24 down in the third set with a four-point run to just show their inspiring passion and energy.

No one’s pretending it will be an easy ride for Serbia in Week 2, when they’ll clash with the top two of the standings – USA and Japan, plus Thailand.

Keep an eye out for Sara Caric, second in the overall scorers’ list – but also captain Katarina Lazovic who comes in at No. 4.

Other key questions for Week 2 will be the quest of Italy, Belgium, Canada and Thailand for their first win of the tournament.

Check out the full results and details of all matches, plus remaining schedule.
https://en.volleyballworld.com/volleyball/competitions/vnl-2021/schedule/