In their second encounter with Poland at the VNL, Ana Beatriz Correa and Gabi Guimaraes improved on their scoring to lead Brazil with 22 and 17 points, respectively, to secure the spot in the semifinals. Ana Beatriz had a field day at the net, deflecting eight attacks by Poland.

Poland, meanwhile, still relied on their top scorer Malwina Smarzek to run their offence with 32 points, but the missing link was Magadalena Stysiak, who produced only 12 markers this time.

Brazil concluded the preliminary round with 11 victories, including eight matches that were decided in straight sets. Brazil qualified for the Finals in third place, sharing the same win-loss record but with a slight advantage in points with Italy and Turkey. Poland, meanwhile, lost two matches in a row in the final round.

Head-to-Head
• Brazil have won 15 of their previous 19 matches against Poland in world level major competitions (W15-L4).
• These teams most recently met on 29 May, when Poland beat Brazil 3-2 in the VNL preliminary round. Poland’s five-set victory ended a 15-match winless run against Brazil at world level.
• Brazil and Poland also faced each other in last year’s FIVB Volleyball Nations League. On 30 May 2018, Brazil beat Poland in straight sets in Apeldoorn (25-20, 25-20, 25-23).

Poland
• On Wednesday, Poland lost their first match in the Volleyball Nations League Finals 3-1 to USA.
• Poland have now lost five of their last seven VNL matches, with the only exceptions in this run their 3-1 victory over Japan and their 3-2 victory over Dominican Republic in the final week of the preliminary round.
• Poland could suffer three successive defeats for the second time this VNL season. They also lost three in a row from 11 to 13 June, against China, USA and Turkey.
• Malwina Smarzek scored a team-high 22 points for Poland in their defeat against USA, lifting her total tally to 387 points this VNL campaign. She is the competition’s top scorer this season.
• Smarzek (387) could become the first player to score 400+ points in a single VNL campaign. Smarzek herself was also the competition’s top scorer last season on 361 points.
• Agnieszka Kakolewska added five stuff blocks to her total and now has 38 points fom blocks in this season’s VNL, for an average of 0.58. 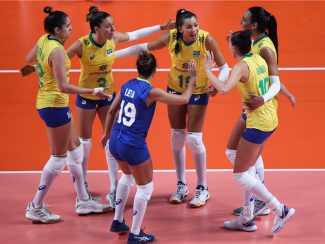