Taliqua Clancy and Mariafe Artacho del Solar experienced a familiar feeling on Sunday in Espinho, Portugal, where they won a Volleyball World Beach Pro Tour Challenge tournament at the Praia da Baia. Their victory came in the same location as one four years ago, in the first year of their partnership on the World Tour, which the Australians think of as their first big victory as teammates.

To stand on top of the podium in Espinho again this week, the Tokyo Olympic silver medallists had to grind and come from behind to defeat Americans Corinne Quiggle and Sarah Schermerhorn in the three-set (19-21, 21-19, 15-12) gold medal match. The podium at the Praia da Baia was completed by Brazilians Andressa Cavalcanti and Vitoria Rodrigues, who finished third.

The victory in Espinho is the first for the Australians on the Beach Pro Tour, following a silver medal at the Kuşadası Challenge in May, and a bronze medal at last week’s Gstaad Elite16. They have finished in the top ten in each of the seven events they have played this season and are currently ranked fifth in the FIVB World Ranking.

The result shows that the playing conditions in Espinho, which is known in international beach volleyball for its deep sand and unpredictable wind, are a good fit for the game of the Australians, who entered the tournament as the top-seeded pair and, despite a pool play upset to Americans Emily Day and Savvy Simo, were able to end the week at the top.

“This is our second time in Espinho and our second victory in Espinho, so we’re really grateful,” Clancy reacted. “It’s really testing conditions, but it’s also great to play on a beach. We’re very happy that we played a good match against the Americans, they definitely made us sweat. Last week we were third in Gstaad and it’s great that we got to win this week.” 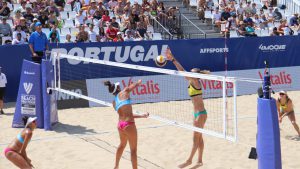 The Americans started the gold medal match on a great rhythm, and were able to build a seven-point lead. Despite seeing the Australians tie the score at 18 points, they were still able to win the opening set 21-19 after a mistake by Mariafe. The second set played out differently, with the teams remaining close on score until the end, when the Australians made a couple of good plays and won it 21-19 with a well-placed shot from Clancy.

The Tokyo Olympic medallists carried the good momentum into the third set and quickly created a 3-1 lead. The Americans didn’t give up and tied at eight points with a block by Schermerhorn. The Australians slipped away again at 13-11 and won the set and match at 15-12 when Clancy hit straight down into the American court.

“We always come here to win,” Mariafe added. “We knew the Americans were a great team, but we had never played them, so we made sure we brought our A-game. It was definitely a tough one, but we’re so happy that we got the win. I’m very proud of our team, we showed grit and a lot of fight. We had our ups and downs during the week, but we stuck together and that’s how we made it.”

Andressa and Vitoria, who lost to the Australians earlier in the semifinals, rebounded with a straight-set (21-19, 21-18) victory over Spanish team Sofia Gonzalez and Paula Soria to take the bronze medal and step on the podium for the second time in the season, repeating their finish at the Itapema Challenge, back in April.

The Beach Pro Tour will feature another Challenge tournament next week, when the tour moves to Africa for the first time for four days of competition in Agadir, Morocco.