Warsaw, Poland, June 15, 2019 – Taliqua Clancy & Mariafe Artacho grabbed the gold at the four-star Warsaw stop in the 2019 FIVB Beach Volleyball World Tour. For the Australian pair this is the fifth gold and overall ninth podium on the World Tour.

Emily Stockman & Kelley Larsen made the incredible run from Tuesday’s country quota, through Wednesday’s qualification, all the way to Saturday’s final and eventually finished with the silver medal, their best result on the Tour so far as team. Previously, they had one bronze medal in their showcase.

The winners at Ostrava two weeks ago, second-seeded Agatha Bednarczuk & Eduarda Santos Lisboa, had to settle for the bronze at Warsaw. This is the 12th World Tour podium for the Brazilian pair. Now they have four gold, three silver and five bronze medals to brag about. 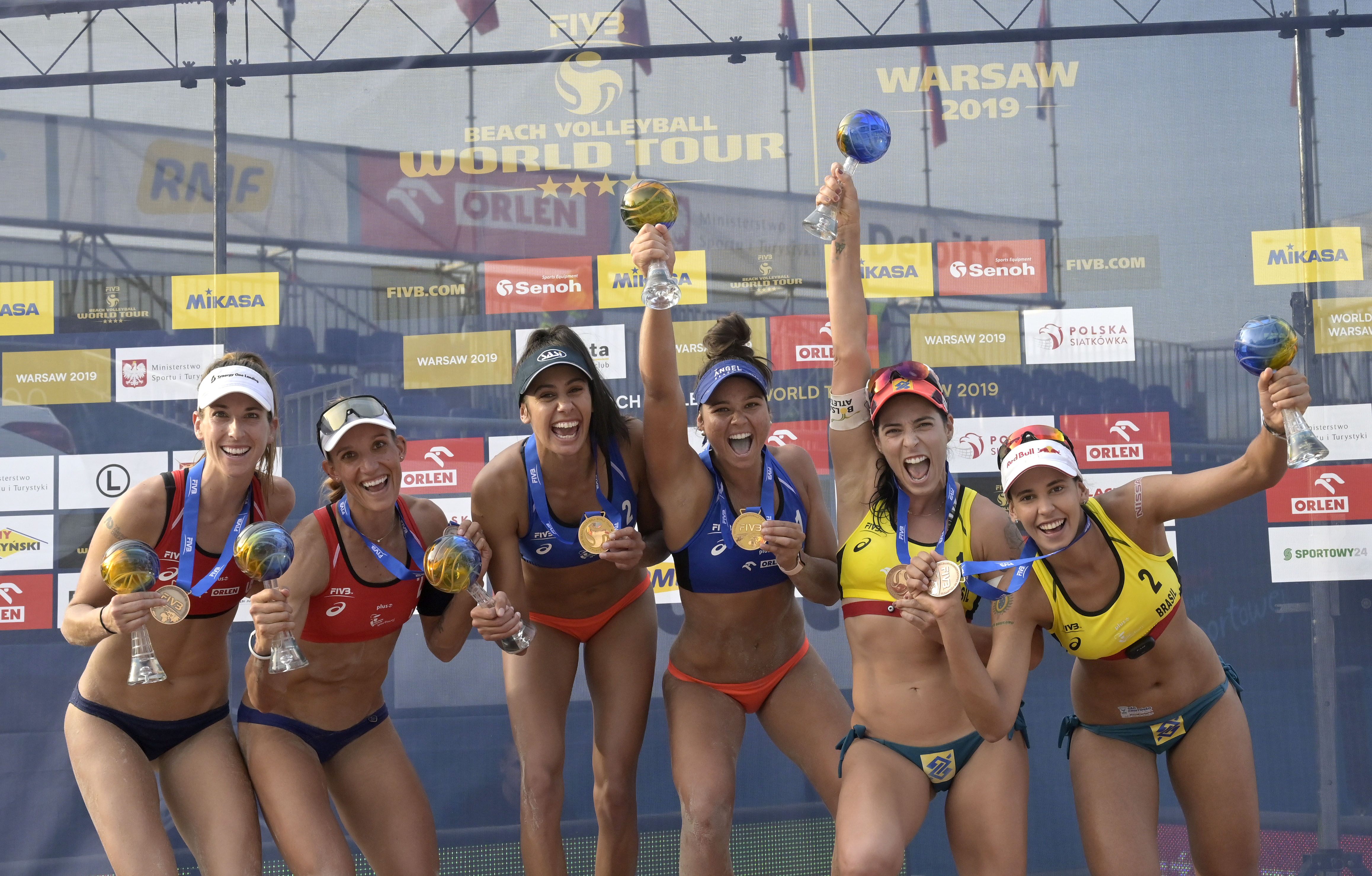 The gold medal match started off in a fierce battle for every point. In the middle of the first set, 11th-seeded Stockman & Larsen managed a small lead and sustained to a double set point. However, fifth-seeded Clancy & Artacho mounted a furious comeback and scored four in a row to take the set. Riding the momentum, the Australians started widening the gap in the second set to reach six consecutive match points. The Americans did not give up and fought off the first three. On the fourth, a tip of the block by Artacho put an end to it all – 2-0 (22-20, 21-17).

“The set is not over until the last whistle. We stuck strong together, we kept fighting every point and we kept hustling. It was really good teamwork and really good patience from us and we just trusted the process,” Mariafe Artacho commented on the great comeback at the end of the first set of the final.

“We are going into the World Championship with the same mentality – point by point, game by game. I am so excited to go back to Hamburg. It’s such a great event and it would be amazing to be in the same position we are today,” stated Taliqua Clancy.

“Australia is a great team. They played really well. There are several things we could have cleaned up and done better in the final, but there is always room for improvement. Overall it was an awesome tournament for us. We learned a lot and we are super grateful for this opportunity,” said Emily Stockman & Kelley Larsen.

In an all-Brazilian bronze medal match, 13th-seeded Maria Antonelli & Carolina Solberg Salgado stayed level with Agatha & Duda through the most part of the first set and towards the end denied a double match point for the opponents. However, two more rallies down the road, Agatha & Duda were already a set ahead. They were much more in control of the second set, gradually extending their lead to five points for the final 2-0 (22-20, 21-16).

“I am very happy, because this bronze medal is very important for the team in the race for Tokyo 2020. It is very hard for Brazilian teams to qualify for the Olympics, so the points are precious,” Duda said.

“We love to be on the podium,” Agatha commented. “Of course, gold is the best, but when we are on the podium we still are among the best players of the tournament. When we lost the semifinal, we were very sad, but then we changed our mindset and came back out stronger. Against the Brazilians, we needed to do something different, because we know each other too well. Duda served great and I was strong in the side-out, while our opponents seemed a little bit tired. Now we have one week at home to rest, practice more and come back even stronger for the World Championship.”

Stockman & Larsen stormed into their semifinal against Agatha & Duda opening an early 7-1 gap and extending it to a 10-point margin at the end of the set. The second set was more competitive as the Brazilians tried fighting back. Still, the Americans reached a double match point converting it on second attempt to a 2-0 (21-11, 21-19) victory.

The first set of the earlier semifinal was really competitive through 17-17. After that point, Clancy & Artacho Del Solar ran off with four in a row to snatch the set and take the lead. The Australians used the momentum to open a wide gap in the second set, but Maria Antonelli & Carol fought back to narrow it down to 17-16, after which another series of four consecutive points delivered the victory to the Australians, with Mariafe Artacho hammering the ball into the sand for the last point – 2-0 (21-17, 21-16). 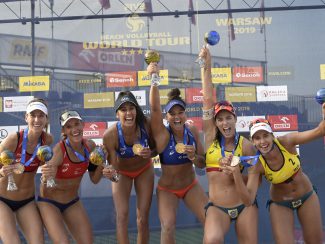 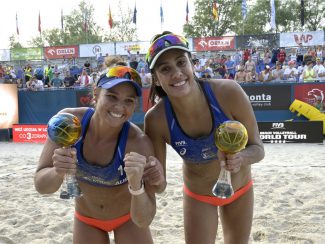