Tehran, Iran, May 13, 2022 – Coaches of Iran, Iraq, Japan, Kazakhstan. Qatar and Thailand shared their ideas after the preliminary inquiry ahead of the kickoff of the 2022 Asian Men’s Club Volleyball Championship here between May 14 and 20. 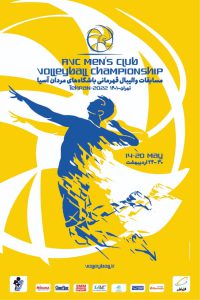 “We are participating in this tournament as the champions of Thailand League. We have one legionnaire from Uzbekistan and two of national players are with our team. We finished fourth in the last edition and we want to improve our place to the third here in Tehran,” Padejsuk Vannachote, Nakhon Ratchasima QminC’s head coach said.

“We are very excited to be here in Iran. We are the V league champion but it is not enough and we want the Asian title. I can predict that it will be so tough to play against strong teams from Iran with their world stars that they are using. We have two foreign players from Russia and China and four of my players are from the national team of Japan. Relying on our abilities, we will try to show our best performance,” Kota Yamamura, Head coach of Suntory Sunbirds, commented.

“We are coming into the tournament to show our best performance. I had to hire some foreign players as some of my players got injured in the last moment. I am here to improve our place and hope to be among the top four teams,” Alaa Khalaf, head coach of South Gas of Iraq, said.

“I have experienced four Asian club title with Paykan in the previous years but I took over Shahdab in the semi season of the Super League when they were seighths but hopefully we could finish as the champion and I am so pleased that we could beat all the Iranian teams with my players by showing quality. Three foreign players from Czech Republic, Canada and Cuba have joined us to assist team to take the trophy,” Alireza Tolookian, head coach of Shahdab, said.

“The Taraz VC (KAZ) team are the champions of the Kazakhstan League and have eight national team players in the team. We are looking to reach the semi-finals,” Grebennikov Boris, head coach of Taraz VC, said.

“It is my first time here in Iran. We are coming in this tournament with a different composition with the team that finished first in the Qatar League because some of my players had to join the national team and some of them were injured. The participating teams are so strong and I know we have a hard task ahead of us,” Macedonian Zarko Ristosk, head coach of Al-Rayyan, said.

A total of eight teams confirmed their participation in the championship and will kick off the preliminary phase in a round-robin system based upon Berger categorization within two pools: