Nakhon Pathom, Thailand, August 10, 2022 – Facing hectic schedules including various activities in preparation for hosting the 2022 AVC Cup for Men at the Nakhon Pathom Provincial Gymnasium and the staging of the first three days of the pool round-robin preliminaries, Control Committee Members and referees officiating in the August 7-14 tournament stood a chance to relax and be energised. Taking a trip to neighbouring Kanchanaburi and visiting tourist attractions was a truly once-in-a-lifetime experience for all of them. 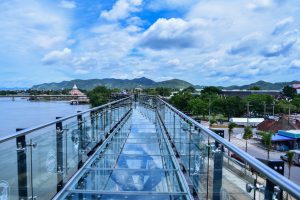 It was rest day on Wednesday when the on-going topflight competition was suspended for one day. Players could continue their training as usual in the morning and relax themselves later in the afternoon, while organisers and those on duty related to the tournament also had a chance to get some rest before the daunting task resumes the following day. 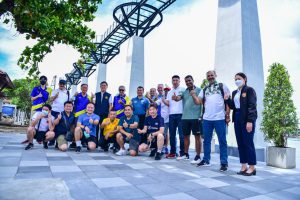 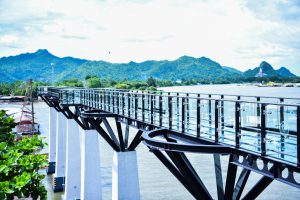 It was a walkway bridge 12 metres high from the ground, with the floor made of clear glass spanning 150-metre stretch that offers magnificent panoramic views looking out to the merging of the Mae Klong, Kwai Noi and Kwai Yai – three rivers joining at that point. 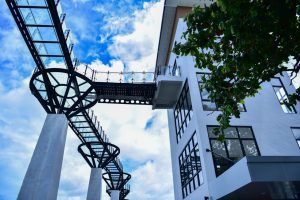 The Kanchanaburi’s new tourist attraction is due to be open early in the new year and is hoped to draw a large number of tourists to admire the views. However, although the place is yet open to the public, a special privilege granted exclusively to the Control Committee and referees officiating in the 2022 AVC Cup for Men. 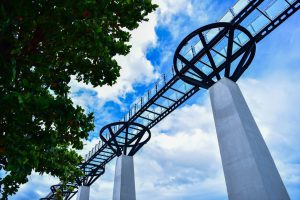 Apart from the Kanchanaburi Sky Walk, they also visited the Kanchanaburi War Cemetery and the Bridge of the River Kwai before returning back to Nakhon Pathom in the afternoon to get ready for busy schedules for the next four days.