USA women have won gold and bronze on the final day of the Volleyball World Beach Pro Tour Futures event on the Gold Coast.

In her debut international performance, Rodriguez was thrilled with the end result.

“It feels great, this is my first international tournament and I feel so blessed that Zana asked me to play and I could come out here and show the world what we got,” Rodriguez said.

“I think that game was what all of our matches so far had led up to.

“We continued to get better and better at dealing with the wind, communicating and playing together.

“The Japanese were a really good team and I think we just capitalized and continued to get better on the things we’ve been working on and it all came to fruition in that last match,” she said. 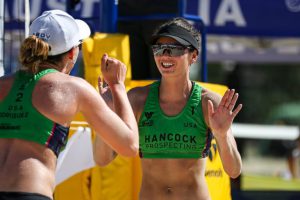 Both teams were eager to get the win, translating to a three set thriller on Coolangatta Beach.

“This has been a whirlwind of a trip for us, and an awesome end result for myself and Taryn,” Nuss said.

“It was our first event of the season, and we were just super excited to get out here and play. 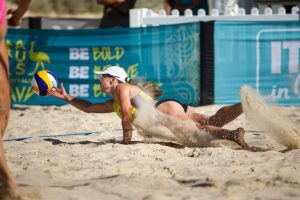 “All throughout AVP (Association of Volleyball Professionals) we kind of came through the qualifiers, so we’d done the grind before.

“The Aussies are a fantastic team, and this is their home court so they had more of a motivating factor there.

“There was a lot of wind out there, so we just had to manage on the bad side, and execute on the better side.

“So we were just focused on that and we’re really happy to get the win,” she said.

The action continues at Coolangatta Beach tomorrow, with the final day of competition of the Australian Beach Volleyball Schools Cup. Click https://abvsc.volleyball.org.au for more information.