The FIVB and Volleyball World today signed a landmark agreement with the Asian Volleyball Confederation (AVC) to explore and enhance the commercial potential of senior international volleyball and beach volleyball events in Asia, as well as focusing on the growth of the sport and empowerment of National Federations, events and athletes. 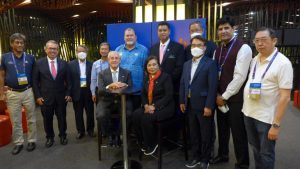 The partnership will see Volleyball World directly invest into the AVC for commercial rights, while the FIVB will increase its investment into the AVC’s 65 National Federations through the revolutionary Volleyball Empowerment programme which is aimed at the development of national teams around the world.

The landmark partnership will also see investment into dedicated human resources in the areas of commercial, development, marketing and operations working within the AVC to further professionalise the administration of the sport.

“We are delighted to announce this landmark, three-party partnership between the FIVB, Volleyball World and the AVC. We will work hand in hand to secure the financial stability and sustainability of the Continental Confederation while providing the opportunities and resources to further boost the sport in Asia.

“Volleyball has a longstanding and successful history in Asia but now, under the leadership of AVC President Rita Subowo and with the approval of the AVC Board of Administration, we have an opportunity to enter a new and brighter chapter for our sport.”

“This partnership is the result of a well-established relationship between the FIVB, Volleyball World and the AVC, underscoring our joint commitment to realising the sport’s full potential in Asia.

“With 65 National Federations in Asia, I have no doubt this agreement will help expand the commercial opportunities for AVC senior international events, accelerate our growth and increase revenues across the commercial areas of media, sponsorship and bidding.”

“This landmark partnership with the AVC is a symbol of volleyball’s continued growth and global appeal. Over half of the world’s volleyball fans are in Asia, and we are excited to have an opportunity to further enhance the sport in such a key region.

“Broadcast and digital engagement is at a record high for the sport and the AVC will be able to access and integrate into Volleyball World’s world-class digital infrastructure, ensuring broader media distribution by making content and events accessible on our TV and digital platforms.”

The signing took place at the Smart Araneta Coliseum, the venue of the Volleyball Nations League (VNL) 2022 pool in the Philippines.