FIVE DOWN, ONE TO GO FOR WOMEN’S VNL FINAL SIX LINEUP

Lausanne, Switzerland, June 18, 2019 – The Final Six lineup for the 2019 FIVB Women’s Volleyball Nations League is almost complete after the opening day of pool play Week 5 today, as Brazil, Turkey, Italy and USA all moved beyond the reach of the rest of the contenders and will join hosts China in Nanjing 3-7 July to fight for the title.

It was a major setback for Japan, who now have a mountain to climb in the last two days of action if they’re to catch up with Poland – as do the Dominican Republic.

Elswehere on Tuesday, defending champions USA mathematically sealed the last of the day’s remaining spots when they came from behind in the first to go two sets up over Russia in Ekaterinburg, before taking the match itself 3-0 (25-23, 25-17, 25-18).

USA were led by last year’s VNL MVP Michelle Bartsch-Hackley who scored 16 points, as Chiaka Ogbogu struck from the middle twice to close the game.

The European side did have a chance in the third to stay alive, but at 23-23 an attack gone wide from Caterina Bosetti, followed by a hit from Ana Beatriz ‘Bia’ Correa that the Italians couldn’t bring back, put an end to the game.

There’s still two match days to spare in pool play that determine the final standings, but as far as the teams already qualified are concerned, this will only serve to set up the two pools in the first round of the Final Six.

But it’s all too little, too late and despite the result there’s nothing Bulgaria can do to avoid relegation. The other Challenger teams (who are eligible for relegation) of the 2019 VNL, Poland, the Dominican Republic and Belgium are way beyond reach.

SHEKUNOV AND VERETIUK BREAK THROUGH IN U21 WORLD CHAMPIONSHIPS MAIN DRAW 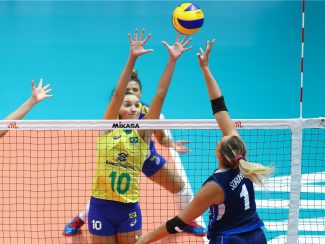