Quang Ninh, Vietnam, May 20, 2022 – It’s all just history repeating itself as Indonesia and Thailand successfully retained their titles and top three in the men’s and women’s events at the previous edition in 2019 remained unchanged at the 31 Southeast Asian Games Beach Volleyball Tournament at Tuan Chau Beach here on Friday. 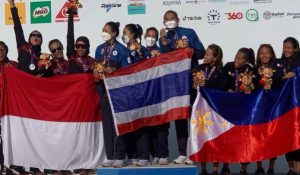 Indonesia, Thailand and Philippines finished top three in the men’s event three years ago in Philippines and returned to make the similar top three podium in the Vietnam-hosted SEA Games here, while Thailand, Indonesia and Philippines made a one-two-three finish in 2019 and the three teams had the same performance this time around. 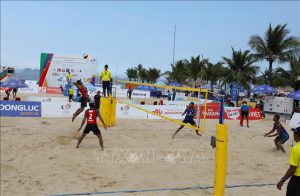 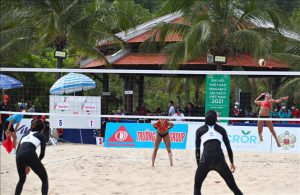 Indonesia stamped their authority in the men’s event, with the 2018 Asian Games silver medallists Ade Rachmawan/Mohammad Ashfiya too strong for Surin Jongklang/Banlue Nakprakhong to brush off the Thai tandem 21-13, 21-18 to give the indomitable Indonesians the first win and Gilang Ramadhan/Rendy Licardo repeated the similar feat with a scintillating 21-17, 21-15 victory against Thais Pithak Tipjan/Poravid Taovalo for the eventual 2-0 wins and the SEA Games title. 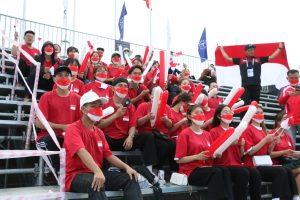 Since the tournament inception in 2005 in Philippines, only Indonesia and individual players from the country captured gold medals in the SEA Games beach volleyball tournament. 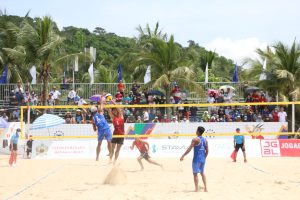 As the Indonesians stole the show to claim gold, the silver medal went to Thailand and Philippines struggled to beat hosts Vietnam in the Golden Match for bronze medal. 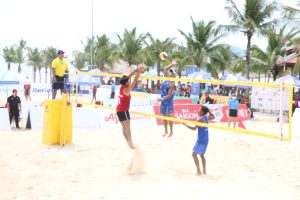 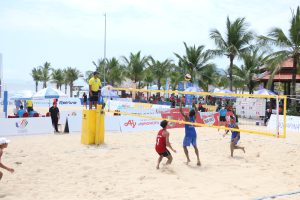 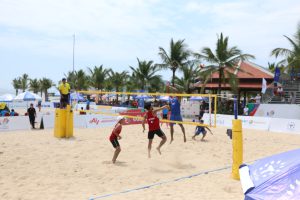 Cambodia came in 5th place after beating Malaysia 2-1 in the classification round for 5th-6th places. 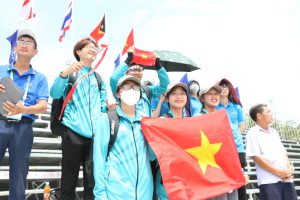 In the women’s showdown, title-holders Thailand continued their remarkable unbeaten run in the 31st SEA Games as they made a clean sweep in the single round-robin preliminaries without losing a single set to their respective rivals. In a rematch with Indonesia in the Friday’s showdown, Thailand came up in a splendid form to beat Indonesia 2-0 for the eventual crown. 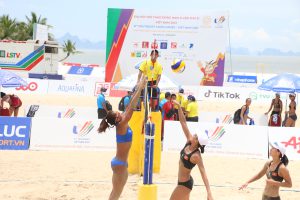 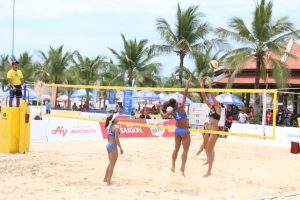 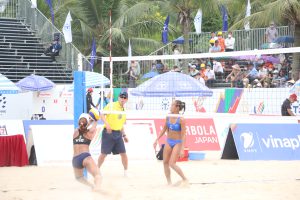 Vietnam were empty-handed in the SEA Games Beach Volleyball Tournament on home soil as they finished fourth place in both men’s and women’s events. 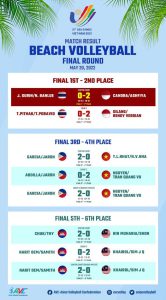 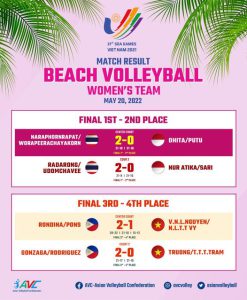