Nakhon Pathom, Thailand, July 6, 2021 – Iran and Australia completely dashed hopes of the host nation in the 3rd Asian U19 Beach Volleyball Championships when they stole the show in the final men’s and women’s encounters, with second seeds Alisha Stevens/Stefanie Fejes pulling off a magnificent comeback 2-1 win against top seeds Suchinna Choemphun/Apinya Saengpaeng to capture the women’s crown. 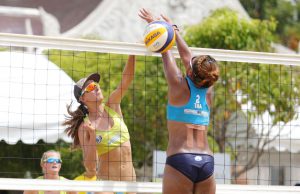 Thailand1’s Suchinna and Apinya did not lose a set to their respective rivals en route the Tuesday’s showdown with Australia1’s Stevens and Fejes, who also remained unbeaten. Both sides powered past their compatriots in the semifinals, with the former outclassing Thailand2’s Patcharaporn Seehawong and Jidapa Bunongkhun 2-0 and the latter struggling to beat Australia2’s Jasmine Fleming/Jesse Mann 2-1. 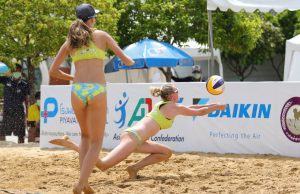 In the searing heat with the maximum temperature as high as 37 degrees Celsius at the competition venue in front of Mida Grande Hotel Dhavaravati Nakhon Pathom here, Suchinna and Apinya pinned their high hopes of winning the women’s title which would help keep the crown at home since in the previous edition three years ago in Nakhon Pathom, Thailand’s Thatsarida Singchuea/Pawarun Chanthawichai reigned supreme in the women’s event. However, things turned sour for Suchinna and Apinya this time as Stevens and Fejes performed superbly throughout the 52-minute three-setter. The Thai duo took the closely-contested first set 21-19, but the determined Australians hit back with effective quick attacks from Stevens to clinch the close second set with the similar margin 21-19 for the 1-1 tie. 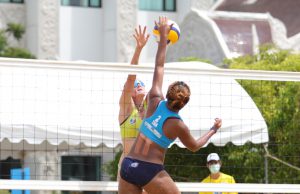 Stevens and Fejes got the decider off to a good start for a narrow 10-9 lead, but seized opportunities when the Thais became more prone with unforced service and attacking mistakes. The Australians won back-to-back points to advance to 12-9.

However, Suchinna and Apinya poured everything they had to catch up with the pacesetters, but their attempts were in vain. Stevens and Fejes went on their remarkable performance to win the third set 15-12 and the eventual women’s crown. “We did our best, but Australia are very strong in this tournament. Despite the loss in the final, I’m happy with our performance since this is our first time in international tournament. That we can come this far is, I think, something beyond my expectation,” Suchinna said. 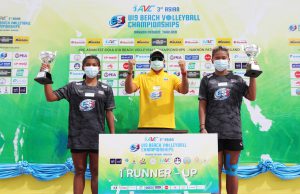 “Due to COVID-19 situation which allowed us no good chance for training properly, we then initially targeted only top four. However, we advanced to the final and that was amazing. Still, we have to learn from mistakes we have made in this tournament and hope we can do better in future matches,” Apinya added. 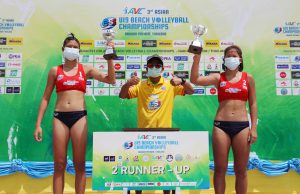 The victory was a sweet revenge for Australia’s loss in the third-place playoff earlier. Australia2’s Jasmine Fleming and Jesse Mann found Thailand2’s Patcharaporn Seehawong and Jidapa Bunongkhun too strong to go down in comfortable straight sets 16-21, 16-21 in 33 minutes.

“Big thanks, Volleyball Australia and everyone who helped get us here so quickly to play in this beautiful venue and I’m very proud. I’m very happy,” Stefanie Fejes said.

“Thank you for supports from back home. It was amazing. And thanks Mom. I miss you,” Alisha Stevens added. 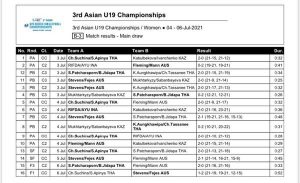 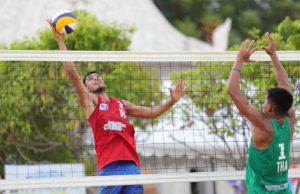 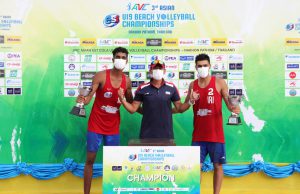 Netitorn and Wachirawit tried hard to make amends for the first-set loss 18-21, but the Iranians combined exceptionally well for attacks and blocks which saw them run away with the convincing 21-15 win in the second set and the championship. 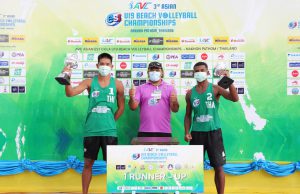 It was a remarkable success for Khakizadeh and Ghorbanpasandi as the superb Iranian duo did not drop a set en route to claiming the men’s title. They brushed off Thailand3’s Nopphawit Puttharong/Anucha Promdee 2-0 in the quarterfinals and repeated the similar feat with another 2-0 win against Thailand2’s Narakorn Chumaphai/Veerayut Sopati in the semifinals before stunning top seeds Thailand1’s Netitorn/Wachirawit 2-0 in the final clash. 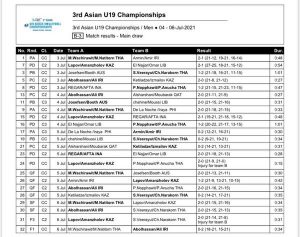 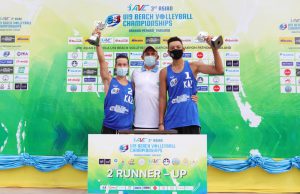 In the third-place playoff earlier, Kazakhstan1’s Darkhan Amanzholov and Damir Lapov were on cloud nine following their 2-0 win against Thailand2’s Narakorn and Veerayut. The Kazakh pairing took the easy first set 21-14 and were leading 17-8 in the second set when the Thais decided to forfeit the game due to the injury problem. 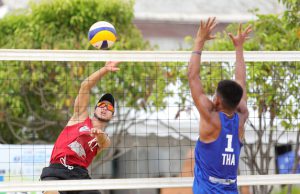 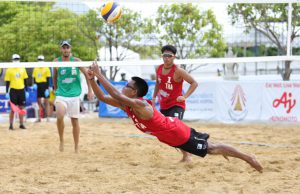