Cholpon-Ata, Kyrgyzstan, September 2, 2022 – Hosts Kyrgyzstan look to heap revenge on Saudi Arabia when both sides sealed their Friday’s semifinals wins to set up the highly-anticipated final showdown of the 3rd AVC Men’s Challenge Cup at the Sports and Recreation Complex Gazprom. 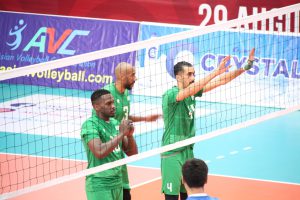 In the electrifying semifinals, Kyrgyzstan, current world No.104, put it past fighting Mongolia in closely-contested straight sets 25-22, 25-21, 25-23, while Saudi Arabia, the only team which have yet lost a match to their respective opponents, faced a daunting challenge from Uzbekistan to pull off dramatic four-set win 25-23, 25-23, 23-25, 25-20. 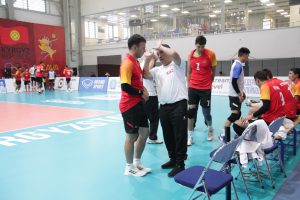 In the Saturday’s championship match, world No.76 Saudi Arabia, which finished 12th at the last year’s Japan-hosted Asian Senior Men’s Championship in Chiba ad Funabashi, are due to face off with Kyrgyzstan. On August 31, the final day of the single pool round-robin preliminaries, the Saudi Arabians completed their campaign in the pool plays on the top of the 4-team standing after a 3-1 rout of the host side. 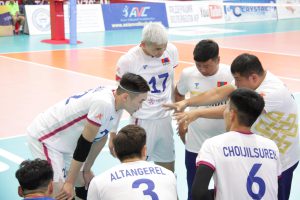 The bronze-medal match will be contested between world No.142 Mongolia and Uzbekistan, current world No.86 and 13th place at the last year’s topflight Asian Championship, to vie for bronze medal. Mongolia also have their sights firmly set on repeating the feat again as they had already beaten Uzbekistan 3-2 in their preliminary round. The Uzbek squad have their fingers crossed and hope to give their best on Saturday. 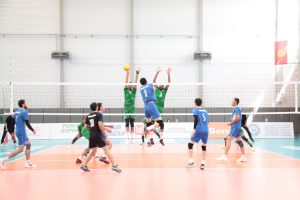 Uzbekistan in battle against Saudi Arabia in semifinals

Ahead of their last day in the competition, the four participating teams stood an equal chance of resting on Thursday, which helped their teams recover after their setbacks, disappointment and hurdles. It seemed they were ready to continue fight for the two spots up for grabs in the Saturday’s showdown. However, only two teams made it, with the remaining two relegated to the bronze-medal encounter.

Fourth-ranked Uzbekistan came into this tough match against Saudi Arabia on a three-game losing streak. The Saudi Arabians finished on top of the standing after the preliminaries and they had already beaten Uzbekistan 3-2. 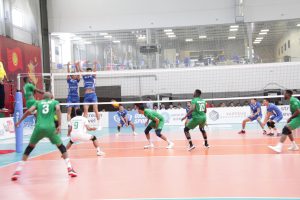 Despite some improvement from the underdogs, Saudi Arabia were on a different level with their powerful hitters particularly outstanding. Ahmed Albakheet, Nawaf Albakheet and Omar Alnajrani became the Three Musketeers who were instrumental in lifting the team’s win in the first two sets 25-23, 25-23. 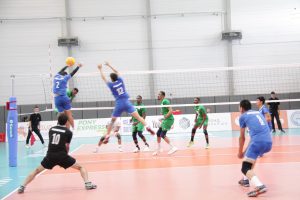 The third set was also hotly-contested, with Saudi Arabia chipping in with big spikes and Uzbekistan were defending brilliantly at the net, blocking almost everything the tough rivals could throw at them. Uzbekistan took the close set 25-23. 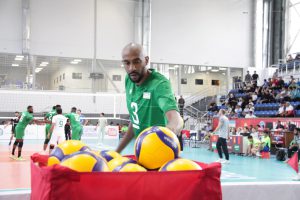 Holding 2-1 advantage, Saudi Arabia were riding the crest of the confidence wave and they came up with big attacks which allowed Uzbekistan failure to really get out of second gear. Saudi Arabia clinched the set 25-20, match and a final berth to hand the Uzbeks another bitter loss. 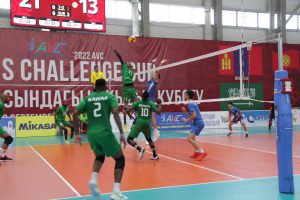 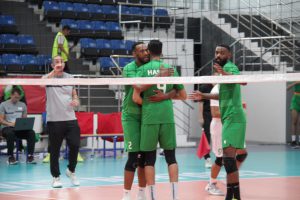 Kyrgyzstan, playing in front of their faithful fans inside the competition site, started the other semifinal match in brighter fashion following their win in the first hard-fought two sets 25-22, 25-21. 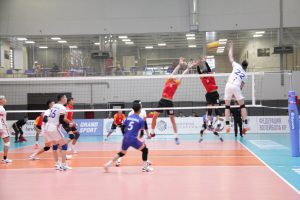 The rhythm was still with Kyrgyzstan in the third set when captain Kanybek Uulu Onolbek was looking increasingly dangerous from spike range as the host side kept their noses in front at both technical timeouts. However, Mongolia gathered their courage and form, with Tamiraa Khangal and Erdenebayar Enkh-Amgalan overcoming the blockers with their aggressive attacks. 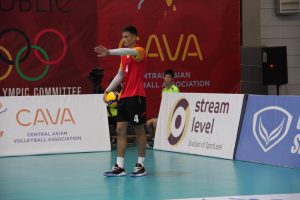 However, fielding better individual talents, Kyrgyzstan clawed their ways back into game to win the third set with a nail-biting 25-23 win for match and a spot in the Saturday’s showdown. 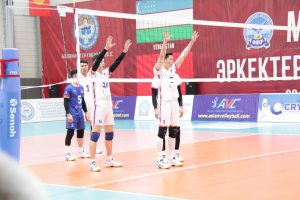 Kanybek Uulu Onolbek scored a match-high 13 points from 12 attacks and one well-placed serve for Kyrgyzstan, while Toktoev Nurmukhammed kept him good company in the team’s attacks to add another 10 points. Erdenebayar Enkh-Amgalan led Mongolia with 11 points including one solid block. 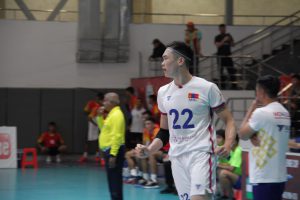 On Saturday, the final day of the competition, Uzbekistan take on Mongolia in the bronze medal match, while Saudi Arabia and Kyrgyzstan will battle it out for the eventual title. 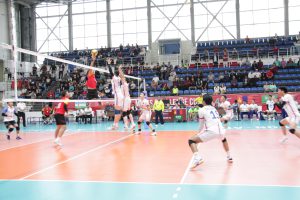 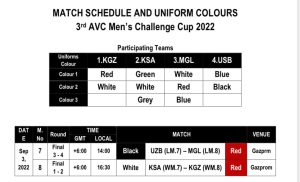