Phuket, Thailand, November 26, 2021 – Australian Christopher McHugh, with his young gun partner Paul Burnett, secured a dominant win on Friday to take a potentially significant step in his quest to win his fifth Asian title, as Taravadee Naraphornrapat/Worapeerachayakorn Kongphopsarutawadee made the host country proud to storm their way to the final showdown in the top-tier Phuket-hosted 2021 Asian Senior Beach Volleyball Championships at Bang Tao Beach. McHugh, 32, is four-time Asian champions, three (2012, 2014 and 2016) with Isaac Kapa and one with Damien Schumann in 2020. The Asian meet in Phuket is the Olympian’s first international since the Tokyo Olympic Games, and with his partner Damien Schumann retiring after Tokyo 2020, McHugh teamed up with the 23-year-old Burnett for the first time. 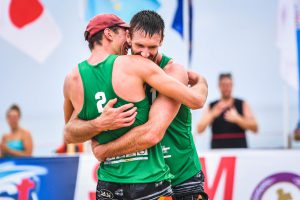 In a semifinal clash of the Titans against Tokyo 2020 Olympic Games bronze medallists and FIVB world No.1 Cherif Younousse/Ahmed Tijan from Qatar, the third seeds McHugh/Burnett pairing took a commanding 5-1 lead in the opening set and continued their overwhelming dominance to win the set. The Aussies still gained a stranglehold in the second set, with Burnett a constant threat from spike range and McHugh’s powerful serving and blocking ability proving a thorn in the Qatari attacks. 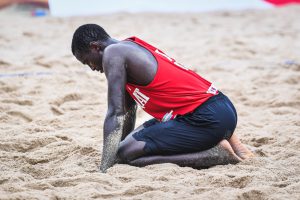 For Australia, the victory was a sweet revenge as the Qatari second seeds earlier eliminated another Australian team, Izac Carracher/James Takken, 21-14, 21-12 in the morning quarterfinals , while McHugh and Burnett ousted Iranians Shekarsaraei Sina Shokati/Aro Mojtaba 23-21, 21-12 in their quarterfinals. 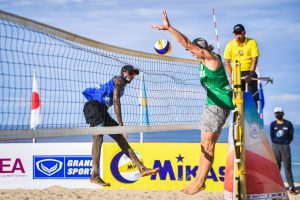 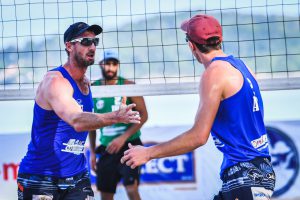 Following the stunning win, McHugh, who made history with his partner Schumann in 2018 by winning gold in the first ever beach volleyball event at the Gold Coast Commonwealth Games, and up-and-coming star Burnett set up the final showdown with Iranians Bahman Salemi/Abolhassan Khakizadeh. 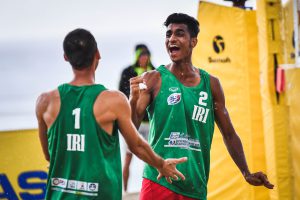 Khakizadeh, 19, has already captured two titles early this year after sweeping both Asian U19 and U21 Championships in Nakhon Pathom. Therefore, his mission to make hattrick in Thailand cannot be overlooked here. This time, Khakizadeh teamed up with veteran Salemi, 32, who had the victory in the 2018 FIVB World Tour One-Star event in Bandar Torkaman to his name.

In the quarterfinals earlier, Salemi and Khakizadeh struggled to beat Filipinos Jude Garcia/Arbasto Anthony Lemuel Jr in hard-fought clash which ended 21-19, 13-21, 15-10. The Iranian duo remained invincible for a comfortable 21-12, 21-14 triumph against Kazakhstan’s Dmitriy Yakovlev/Sergey Bogatu in the semifinal clash. Yakovlev and Bogatu had earlier shattered the Thailand’s lone hope in the men’s event after 2-0 (21-14, 21-12) demolition of Kitti Duangjinda/Phanupong Thanan in the quarterfinals. 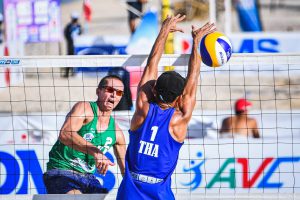 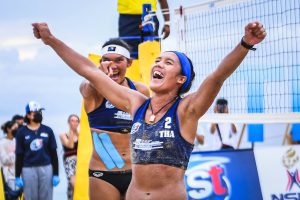 Taravadee and Worapeerachayakorn posted their quarterfinal win against Australians Jasmine Fleming/Stefanie Fejes 21-12, 21-15 and continued their remarkable run after a stunning 21-16,, 21-17 victory against another Australian team, Phoebe Bell/Georgia Johnson, in the semifinal encounter.

“I admit that I was a bit excited in this match, but still had one thing in mind – to do my best. I hope to come up with good things in the final showdown,” said Worapeerachayakorn, who stands 190cm tall.

Teammate Taravadee added, “To fix any possible mistake we made today, we will go back and study tapes of our rivals in the final no matter who they are (Japan or New Zealand). I’m 100% confident and I will try my best in the final.”

Bell regularly teamed up with Jessyka Ngauamo, but due to her partner’s unexpected injury, Bell partnered Johnson in the Phuket-hosted Championships. The Bell-Johnson duo entered the semifinals following their closely-contested match against Japanese third seeds Akiko Hasegawa/Yurika Sakagushi which ended 21-19, 21-19 in favour of the Australians. En route to the Saturday’s final showdown, Ishii and Mizoe saw off fifth seeds Asami Shiba/Takemi Nishibori 21-18, 19-21, 15-8 in the all-Japanese quarterfinal clash. In the semifinals, they survived huge scare from Shaunna Polley/Alice Zeimann to beat the Kiwis with a fantastic comeback 2-1 (17-21, 26-24, 15-12). Polley and Zeimann, who last month in an effort of qualifying for the 2022 Commonwealth Games in Birmingham captured the FIVB One-Star event in Cortegaca, Portugal, struggled to beat Thai top seeds Varapatsorn Radarong/Tanarattha Udomchavee 14-21, 21-13, 15-9 in the quarterfinals earlier. 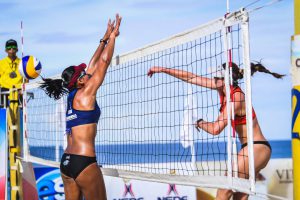 On Saturday, the final day of the action-packed five-day Championships, the women’s bronze-medal match between Kiwis Polley/Zeimann and Australians Bell/Johnson will be held at midday 12pm Bangkok time, followed by the men’s third-place playoff between Qataris Cherif/Ahmed and Kazakhs Yakovlev/Bogatu at 1pm.

The final showdowns will start at 2pm in the men’s event between Aussies McHugh/Burnett and Iranians Salemi/Khakizadeh, with Thais Taravadee/Worapeerachayakorn fighting it out with Japanese Ishii/Mizoe at 3pm for the women’s crown. 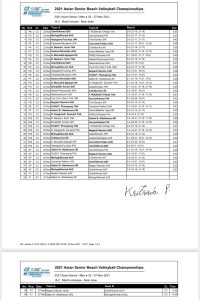 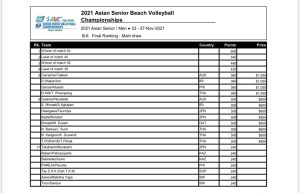