The Volleyball Empowerment Commission on Monday discussed the importance developing strong national teams and supporting National Federations during its meeting held in a hybrid format.

The Commission was created in 2021 following the launch of the FIVB’s year-round revolutionary development programme. The majority of Commission members joined online, with several members joining from the FIVB Headquarters in Lausanne, Switzerland to discuss the most effective ways to supports national teams, athletes and National Federations to achieve their goals and reach their full potential. 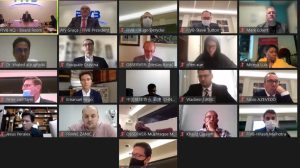 FIVB President Dr Ary S. Graça F° and Commission President Vladimir Grbic, an Olympic champion at Sydney 2000, stressed the importance of the Commission working closely with the FIVB Development Commission, of which the President and Secretary were also in attendance to observe the meeting.

Speaking at the meeting, the FIVB President said:

“I strongly believe that the money that comes from the sport must be reinvested back into the sport. Since 2017, the FIVB has approved 480 projects from 222 National Federations from all five Continental Confederations, which totals an investment of 11 million USD. Of these 480 projects, 189 were coach support projects in 108 countries, 256 were volleyball equipment projects and 35 were knowledge transfer programmes. We will continue working with both the FIVB Volleyball Empowerment and Development Commissions to ensure the best support is provided to National Federations all over the world.”

During the meeting, the Commission also listened to the latest updates on Volleyball World as well as a report from the Technical and Development department detailing various ongoing projects and Olympic Solidarity programmes. It was confirmed that during the first and second windows of application, 55 development project applications were received. Of these, 50 projects have already been approved: 24 coach support projects, 25 volleyball equipment projects and 1 knowledge transfer project. Additionally, there are 29 ongoing coach projects from 2020 that were suspended because of COVID-19 and are now resuming.

The FIVB Commission meetings are set to continue this week with the Development Commission on February 9 and Volleyball Council meeting on February 11.