The FIVB has welcomed the IOC Executive Board’s confirmation of the qualification systems for volleyball and beach volleyball at the Olympic Games Paris 2024.

Twelve teams per gender will participate in the Olympic volleyball competition at Paris 2024. As the host nation, France, the current men’s Olympic volleyball champions, has secured its place in both the men’s and women’s competitions. The other eleven quota places per gender will be allocated via a two-step qualification process that ensures the best volleyball nations can participate at the event while observing the principle of universality.

In particular, six Olympic quota places per gender will be contested during the Olympic Qualification Tournaments (OQTs) to be held in September-October 2023. Here, the top 24 teams as per the FIVB Volleyball Senior World Ranking (WR) not yet qualified will be split into three pools of eight teams. The top two teams of each pool will then qualify for the Olympic Games Paris 2024.

The remaining five Olympic places per gender will be filled by selecting the top five not yet qualified teams in the FIVB WR as of the end of the preliminary phase of the Volleyball Nations League (VNL) 2024. To guarantee the principle of universality, these teams will be selected as per the following order of priority:

Volleyball World has already launched the bidding process for the OQTs 2023 with a deadline to submit bidding applications by the end of April 2022. The goal is to confirm the hosts shortly after, while the 24 qualified teams for the event are set to be confirmed by the end of October 2022 for both genders.

Twenty-four teams per gender will compete at the Olympic Games Paris 2024 with a maximum of two teams per country per gender being able to qualify. The host team, France, is automatically granted one quota spot in both the men’s and women’s tournaments. 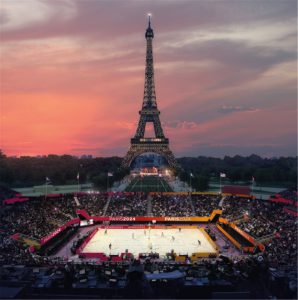 In beach volleyball, there will be three qualification pathways for National Olympic Committees (NOCs) to obtain an Olympic ticket for Paris 2024, respecting the principle of universality and ensuring the best teams are qualified for the event:

3)      The winning country of each Beach Volleyball Continental Qualification event will earn a ticket to the Games. The final phase of these five events will take place between 13 to 23 June 2024.

As a general principle, quota places are allocated to the NOCs and an athlete can only obtain one quota place for his/her own country.

To increase the excitement and value of every single volleyball match played at the Olympic Games, the volleyball tournament at Paris 2024 will adopt a new format. In particular, the pool phase will consist of three pools of four teams rather than two pools of six teams.

The top two teams from each pool and the two best third-placed teams will advance to the final phase of the tournament. The final phase will remain the same with quarterfinals, semi-finals and then the gold and bronze medal matches.

Meanwhile, the formula for the beach volleyball tournament at Paris 2024 will remain the same as in Tokyo 2020.