PREPARATIONS FOR ASIAN U21 BV CHAMPIONSHIPS IN ROI ET ON TRACK

Roi Et, Thailand, February 12, 2019 – Preparations and construction site inspection have been made to make sure everything is in order ahead of the staging of the SMM Asian U21 Beach Volleyball Championships from March 15 to 18 at the Ban Nong Ya Ma Community School courts here.

The four-day competition serves as the Asian qualification for the FIVB Beach Volleyball U21 World Championships, due to take place in Udon Thani, Thailand between June 18 to 23.

This is the third consecutive time that Thailand will host the Asian U21 Beach Volleyball Championships. Kamphaeng Phet, a province in the upper centre of the country, hosted the inaugural competition in 2016 and China made a clean sweep of both men’s and women’s titles. A year later, Roi Et emerged as the host province for the second edition of the championships, which saw Australia and hosts Thailand share honours. 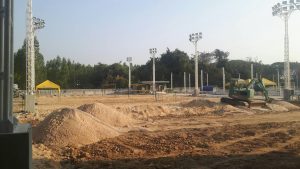 In the Tuesday’s meeting, questions on preparations of the host province had been raised to identify solutions to concerning problems, while discussions were also held among the attendants to ensure the possible best preparation of the host province and Thailand in particular. However, although a few tough tasks await them, the organisers had guaranteed that everything will be fine as long as they work together and promised that they will make it the best they can.

Top five teams in each gender from the championships will secure berths to strut their stuff at the FIVB Beach Volleyball U21 World Championships in Udon Thani.

According to the FIVB press release, Thailand won the bid to host the U21 World Championships from a total of seven proposals submitted by national volleyball federations across four volleyball confederation territories.

Volleyball and beach volleyball popularity in Thailand is among the highest in the world. Thailand competed in and staged two rounds of matches in last year’s Volleyball Nations League, and the TVA has staged a number of FIVB Beach Volleyball World Tour events of various star categories.