Bangkok, Thailand, January 14, 2023 – The first section of the Qatar Men’s Volleyball League 2022-2023 season will commence on January 15 at the Qatar Volleyball Association Hall, with 10 strong teams testing their mettle to vie for top honour.

The League, which continues until March 29, will kick off its first week campaign on Sunday, with two matches being contested. Al Rayyan will start their title defence against Al Shamal in the curtain-raiser, while the second encounter sees Police SC play Al Gharafa.

Another two matches will be held on Monday, with Al-Wakra taking on Al-Sadd in the first clash and Al-Ahli challenging Qatar SC in the second match. The first week’s last match will be played on Tuesday between Al-Arabi and Al-Khor.

In the 2021-2022 season, Al Rayyan performed brilliantly to be crowned the eventual champions after topping the table with 49 points, four points ahead of the runners-up Police SC. 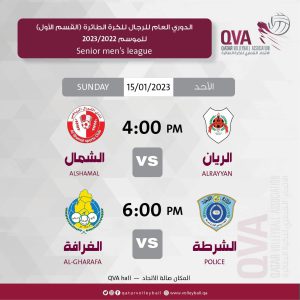