TEAMS ARRIVE AT TRAINING CAMP IN DOHA AHEAD OF KATARA OPEN

Doha, Qatar, March 9 , 2019 – Teams arrived at the Katara Cultural Village to the north of Qatar’s capital for intensive training in their final preparation for the FIVB Beach Volleyball World Tour 4-Star Katara Open, which is set for March 12 to 16.

For the fifth time since November 2014, Qatar will host an international tournament for men as the FIVB Beach Volleyball World Tour returns to Doha with European teams seeking to continue their gold medal dominance.

To ensure their bright prospect in the top-notch tournament, some of the beach volleyball players in the world arrived in Doha earlier for their training stints ahead of the competitive competition. The qualification round will take place on March 12 with 32 teams single elimination to qualify 8 teams to the March 13-16 main draw, where 32 teams modified pool play followed by single elimination. 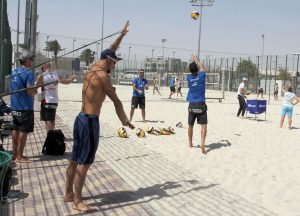 Among teams arriving earlier included Canada, who have been undergoing their training from March 4 to 12, while team players from Poland, Brazil, Italy, Switzerland and Norway started their training period on March 6 and their encampment will come to conclusion on March 12 when the qualification round will be held that day.

Pairs from Germany, Italy and the Netherlands have topped the previous four Doha podiums, with lDutchmen Alexander Brouwer and Robert Meeuwsen, the bronze medal finishers at the Rio 2016 Olympic Games and the 2013 FIVB world champions, capturing the 2018 Qatar gold.

Fluggen (Nils Ehlers), Carambula (Enrico Rossi) and Ranghieri (Marco Caminati) are expected to compete in the 2019 Doha Open. A total of 34 Olympians have entered this year’s event at the Katara Cultural Village, including three teams from the Rio 2016 Summer Games – Aleksandrs Samoilovs/Janis Smedins of Latvia, Piotr Kantor/Bartosz Losiak of Poland and Adrian Gavira/Pablo Herrera of Spain.