THE DUTCH AND A GERMAN REIGN OER HAMBURG

Four days of incredible King of the Court beach volleyball have come to an end in Hamburg, where the global 2022 Crown Series kicked off. Three Dutch players and one German ascended the throne on Sunday on the Heiligengeistfeld in Hamburg’s city center.

Pleun Ypma and Emi van Driel are the Queens, they set aside the opposition by playing gutsy beach volleyball, Robert Meeuwsen and Clemens Wickler proved their dominance once more in the final and actually performed a royal flush, winning all of their matches in the Active City Arena. 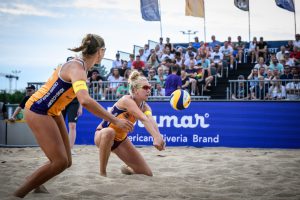 The story of the Queens of Hamburg starts on Saturday night, when Pleun Ypma and Emi van Driel starred in the play-off for a final spot in the semifinals. They decided that courage was the way to go, don’t leave anything behind on court. It helped them a lot in the semis, where they earned a direct place in the final. They scored a total of 14 points in the final round, which earns them the title of Queens of Hamburg for at least a year.

Teams from France, USA, Canada and New Zealand joined them in the final, but had to play second fiddle. Eventually the Canadian twins Megan and Nicole McNamara won the bronze, next to having the longest stay of the tournament. They earned themselves two Maurice Lacroix watches worth € 1,500. The second step on the podium fell victim to the Kiwis Shauna Polley and Alice Zeimann, who had their Queen of the Court debut. 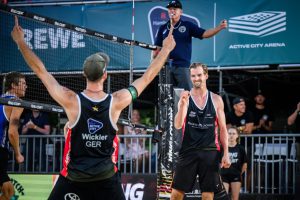 Before the start of the final of the men one thing was clear already: Clemens Wickler and Robert Meeuwsen, the German-Dutch combo for the occasion, would be the team to beat.

They outscored everyone this week and won all of their matches. They have a royal flush to their name. The story of the final was grand. In the first round the reigning Kings of Doha from last January had to leave the battle, next to go were 2018 King of Utrecht Adrian Gavira and his partner Alejandro Huerta. In the final round Meeuwsen’s regular partner Alexander Brouwer gave it his all, but together with Ruben Penninga their efforts fell short. Estonians Mart Tiisaar and Kusti Nõlvak tried their best, but were no match for Wickler/Meeuwsen. They do take home the silver.

Thus ended the tenth international King of the Court tournament. It was broadcast live in over 24 countries, on tv and our brand-new platform King of the Court TV. $ 100,000 in prize money, eight Maurice Lacroix watches were won by the Kings and Queens and the players that achieved the longest stay of the tournament. In the men’s side Wickler and Meeuwsen also had the longest stay, so they have earned two watches each.

Next stop on the King of the Court Crown Series 2022 is Utrecht. From September 6 till 11 the inaugural King of the Court European Finals will be organized in cooperation with Europe’s volleyball confederation CEV.