Jiangmen, China, November 26, 2021 – Defending champion Tianjin made it two wins from two in the 2021-2022 Chinese Women’s Volleyball League after they dominated Zhejiang 3-0 here on Friday. 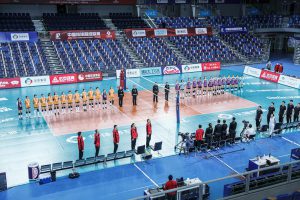 Tianjin were fresh from a 3-1 victory on Thursday and they opened Friday’s fixture with a 8-0 lead and quickly took the first set with a stunning 25-8 win.

Zhejiang bounced back later but still failed to turn the game around, as Tianjin sealed the following two sets with 25-21 and 25-19. On Thursday, Tianjin overcame Shandong, while Liaoning upset Jiangsu with a straight-sets victory in the opening day of the League.

The opener of this season saw Fujian defeat Henan 3-0, in which the score of the second set climbed to the significant high 33-31.