Quang Ninh, Vietnam, May 18, 2022 – Reigning women’s champions Thailand brushed off Singapore for comfortable wins to continue remarkable unbeaten record by not dropping a set to their respective rivals, as hosts Vietnam on Wednesday joined Philippines, Thailand and Indonesia in the action-packed men’s semifinals of the 31st Southeast Asian Games Beach Volleyball Tournament at Tuan Chau Beach. 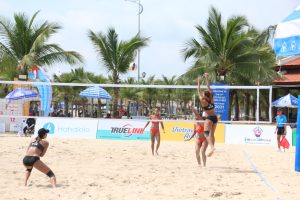 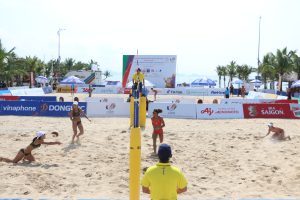 Thailand captured four wins on the trot to stay atop the standing. On Thursday, the final day of the single round-robin preliminaries, Thailand will strut their stuff against Philippines, which notched three wins against one loss. 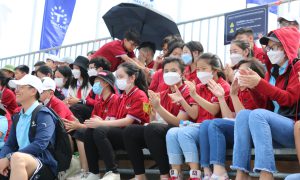 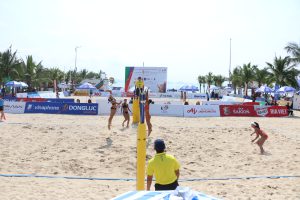 Indonesia, silver medallists at the previous edition in Philippines three years ago, still keep their high hopes of advancing to the gold-medal match alive following their exceptional 2-0 wins against Malaysia on Wednesday. 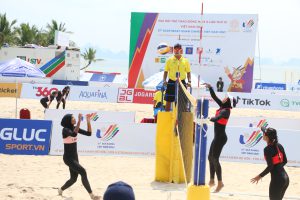 Indonesia will be next pitted against hosts Vietnam on Thursday, while Malaysia and Singapore will fight it out for their first win in the six-day tournament. 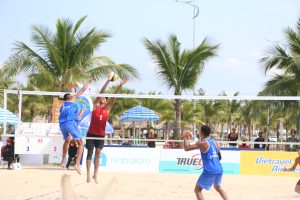 Meanwhile, in the men’s competition, Philippines and Indonesia remained undefeated to top their pools at the end of the pool round-robin preliminaries on Wednesday.

The Wednesday’s highly-anticipated clash between Philippines and hosts Vietnam was decided by the golden match, with the former stealing the show to run away with the dramatic 2-1 win. 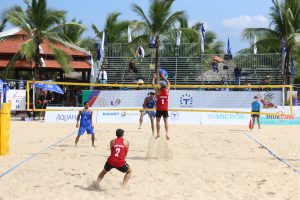 The golden match was won by Philippines as Jude Garcia switched his partner Anthony Lemuel Jr Arbasto to team up with Jaron Requinton and their intention worked out pretty well when the Philippine duo performed superbly to beat Vietnamese Nhat Ton Long/Nguyen Van Nha 21-18, 21-15 and handed Philippines the eventual 2-1 wins. 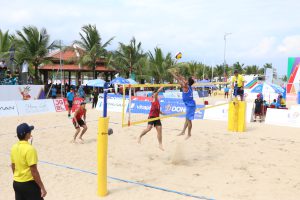 Thailand and Indonesia also enjoyed their comfortable wins on Wednesday, with the former powering past Laos 2-0 and the latter through with the similar performance against Malaysia.

At the end of pool round-robin preliminaries on Wednesday, Philippines topped Pool A with three straight wins, followed by hosts Vietnam with two wins against one loss. Cambodia came in third place with one win against two losses and winless Singapore finished on the bottom of the pool.

Pool B was dominated by title-holders Indonesia with three wins in a row, while Thailand finished second with two wins against one loss. Malaysia claimed the third spot with one win against two losses and Laos lost them all to finish fourth.

The men’s competition reaches its climax on Thursday, with top two teams from each pool contesting the cross semifinals. Pool A winners Philippines are due to take on Pool B second place Thailand, while Pool B winners Indonesia and Pool A second place Vietnam are set to fight it out for a place in the final showdown. 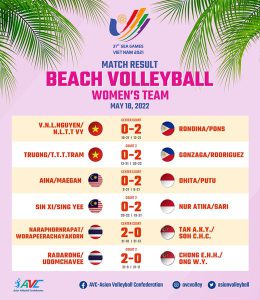