Jiangmen, China, December 31, 2021 – Reigning champions Tianjin demolished Liaoning in straight sets and Jiangsu pulled off a dramatic four-set win against Shanghai in the first game of the semifinals of the 2021-2022 Chinese Women’s Volleyball Super League at Jiangmen Sports Center Gymnasium on Thursday. 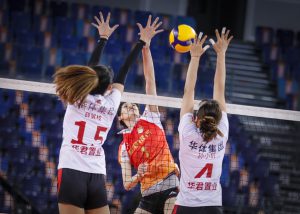 Facing superior Tianjin, Liaoning fought hard to draw 17-17 in the first set before Melissa Vargas scored consecutive spikes on both wings to help the title-holders surge ahead to a commanding 20-17 lead. Liaoning requested a timeout to improve their fortunes, but Tianjin’s multiple offensive firepower was strong. With Li Yingying’s successful back row attacks, Tianjin clinched the set 25-22. 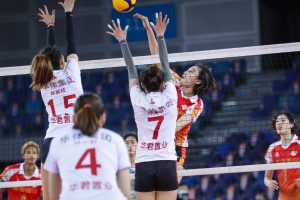 Despite many service errors, Tianjin blossomed more and gradually established an advantage in the second set. Liaoning requested a timeout for adjustment when they were 13-16 and 16-20 behind, but Tianjin rolled on their splendid form to take the set 25-17.

With two sets in hand, Tianjin started to relax slightly in the third set, with multiple receiving and serving failures, and the offense was frustrated. Liaoning took the opportunity to widen the difference, the score went from 11-5 to 15-7. 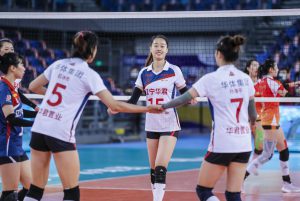 However, with their height advantage at the net, Tianjin succeeded in blocking many times and once reduced the difference to 3 points. Liaoning upped their tempo and continued to lead 23-18. Tianjin replaced Yuan Xinyue at a critical moment. She and her teammates blocked five consecutive times for a 23-23 tie.

Li Yingying succeeded in smashing and put Tianjin in front 24-23 before Liaoning blocked Li Yingying’s two spikes in succession and got the game points back. However, Vargas came for a help to give Tianjin a comeback 27-25 win in the set and the 3-0 match, stretching their aura of invincibility to 14 matches in a row. 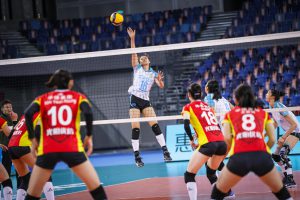 In the other semifinal clash, Jiangsu took the hard-fought first two sets 26-24, 25-20 against Shanghai, but went down 26-28 in a close battle in the third set to the tough rivals. The fourth set saw Jiangsu take an initial 6-1 lead and held firm to win the set 25-18 and match. 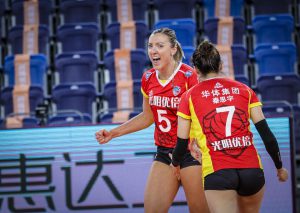 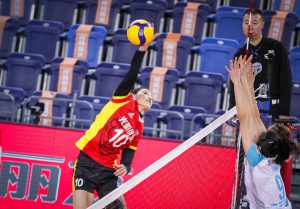 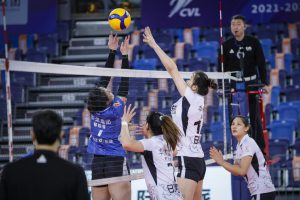 The round-robin 5th-8th in the third stage of the League continues on Friday, with Fujian taking on Guangdong and Shenzhen facing Shandong. 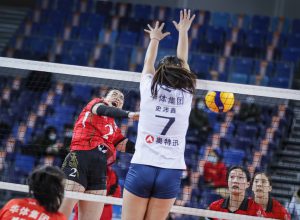 The second game of the semifinals saw Tianjin continue to face Liaoning and Shanghai challenge Jiangsu.