The Beach Pro Tour calendar for 2023 has been announced with 18 Futures events across Africa, Asia, Europe and Oceania already confirmed as athletes and fans alike can look forward to the return of beach volleyball festivities both on and off the sand.

It has also been confirmed that the FIVB U21 Beach Volleyball World Championships 2023 will be staged in Roi Et, Thailand from 8 to 12 November.

Meanwhile, the 2023 Beach Pro Tour season will get underway at Mt. Maunganui Beach in New Zealand from 16-19 March, before the tour continues in Oceania with stops in Coolangatta Beach, Australia as well as Tahiti, French Polynesia.

From 20-23 April, Asia will host its first Futures event of 2023 with a men’s and women’s event in Satun, Thailand. The tour will later return to the continent with an event in Tuan Chau Island, Vietnam in June, and a stop in Qidong, China in August.

Europe will kick off the Futures season in May in Madrid, as was the case last year. The Spanish capital will host men’s and women’s standalone Futures events on 11-14 May and 18-21 May, respectively. The tour will then land in Cervia, a popular Italian seaside resort, in late May. 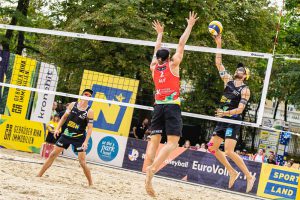 All but one of the European venues confirmed this far welcome back the Beach Pro Tour after its inaugural season – with Futures events due to take place in Lecce, Italy; Ios Island, Greece; Leuven, Belgium; Myslowice and Warsaw in Poland, as well as Baden, Austria.

In addition, Africa is set to host its first Beach Pro Tour event with a men’s and women’s Futures tournament in Bujumbura, Burundi.

The 2023 Beach Pro Tour calendar currently features 18 confirmed Futures events, which act as a feeder to the Challenge-level events. The FIVB is still in negotiation with potential organisers to bring Beach Pro Tour Future events to even more places around the globe, and further stops will be announced during the course of the season.