Lausanne, Switzerland, June 12, 2019 – Thailand star middle blocker Pleumjit Thinkaow looked back at her favourite moment in the 2019 women’s FIVB Volleyball Nations League when she kept the ball alive with some clever footwork in her team’s victory against Korea in Macao in week 2 of the competition.

Thailand began week 4 of the competition on Tuesday with a straight-set victory against reigning world champions Serbia. They lost to Brazil on Wednesday but will hope to bounce back against pool hosts Japan on Thursday. 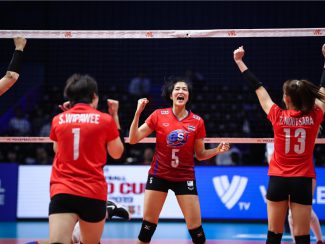